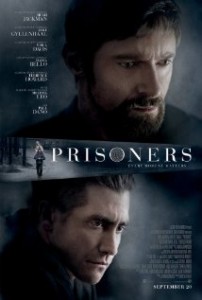 Canadian director Denis Villeneuve creates a powerful psychological thriller that is packed with emotion and pathos in the tradition of “Zodiac Killer”.  The subject is child abduction and it is a tour de force of outstanding character work   What makes the exhaustive 153 minute worthwhile is its heart wrenching intensity and the twists and turns in the plot by screenwriter Aaron Guzikowski  that keep you on the edge of your seat.

A superb Hugh Jackman plays a carpenter named Keller Dover who is a fundamentalist Christian with a six year old daughter that goes missing the same time as a 7 year old daughter of a Pennsylvania music teacher named Franklin Birch and his wife Nancy,  played respectively,  by the ubiquitous Terrence Howard and Viola Davis.   Keller will stop at nothing to get back his daughter resorting to torture of the only possible suspect, a mentally challenged RV driver, Alex Jones (Paul Dano) who was questioned by police and let go.

Jake Gyllenhaal as Loki the detective determined to get to the bottom of this mystery has a penetrating drive and determination which we admire and respect. While Keller seems to be spinning his wheels, Loki moves on,  keeping us fascinated.  The roving camera and the set and music design create a consistent tone which also pull us into the story.

“Prisoners”, which was well received at Telluride and Toronto, is an audience pleasing film which is worth your attention. It asks the penetrating question of how far should a parent go to get back their missing child. Its answer will surprise you and make you a little more sympathetic to an amber alert.