The motion-capture technology is fantastic. The reboot is worthy and I’m looking forward to a long franchise.

“Take your stinking paws off me, you damned dirty ape!” The screenwriters, Rick Jaffa and Amanda Silver, give fine homage to the original PLANET OF THE APES with small touches fans will appreciate. 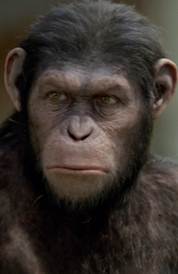 Geneticist Will Rodman (James Franco in a very bad wig) has been working for a giant pharmaceutical company experimenting on primates. There is about 94% (downgraded from 99%) identical DNA between human beings and chimpanzees, our closest living relatives.

Rodman has a moral, good reason for his unorthodox research. His father Charles (John Lithgow) has advancing Alzheimer’s. It used to be simply old age or senility but, quoting Dylan Thomas, we, as a medically-advanced society, will “not go gentle into that good night”.

Find a drug to kill that damned dirty virus!

Rodman has isolated a super-gene and develops a drug called AOZ-112. A young chimp – Patient Zero – on the drug can do intelligent, complex tests. Every day she gets smarter. Rodman sneaks out the drug and gives it to his father. Charles starts playing the piano again. He’s back to his old, snappy self! But suddenly, Patient Zero goes berserk and has to be put down. Steven Jacobs (David Oyelowo), Rodman’s nattily dressed, profits-obsessed boss, has to end the program. 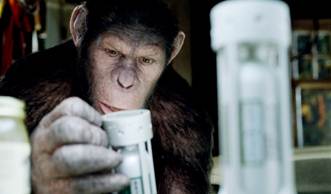 But Patient Zero was pregnant and Rodman takes Caesar (realized through motion-capture technology by Andy Serkis) home to raise as his son. Rodman merrily ignores the fact that adult chimpanzees, particularly males, can be very aggressive. They are highly territorial and are known to kill other chimps. Chimpanzees also engage in targeted hunting of lower order primates and use the meat from these kills as a “social tool” within their community. Luckily, Rodman does not have a pet.

Rodman finds love with veterinarian Caroline (Freida Pinto), who is clearly in the passive, submissive role. Shouldn’t Caroline be the “voice of reason” here? Isn’t she worried about Caesar’s budding sexuality? 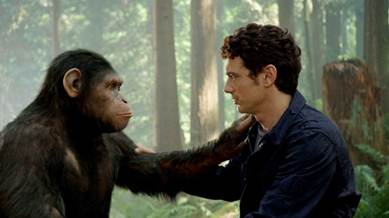 In 2007 I visited the Ngamba Island Chimpanzee sanctuary in the central part of Uganda. We were there for the 2 feedings promptly at 11am and 3pm. We were very close to the action and primate behavior, especially the social rank, which was evidently on display. Also, it was amazing how intelligent chimpanzees are. They use sticks to get at food that doesn’t quite make it over the fence. Our chimpanzee relatives have a “dominance hierarchy” and “We hold these truths to be self-evident, that all men are created equal” is clearly not a concept we learned by observing, or being linked through evolution, to other species.

It’s a radical concept not found in any other species on our planet.

Caesar is stuck babysitting Charles and when adolescence hits and he goes medieval, he is sent to a rehabilitation facility run by John Landon (Brian Cox) and lorded over by Landon’s unhappy, sadistic son Dodge (Tom Felton). The good news? Caesar is among his own, as well as a humble orangutan and a caged gorilla.*

But, Caesar is smart and is going to rise in the chimp social rankings by using a “rope-a–dope” fighting style. Once in charge and given due respect, he plans a prison break!

Thank goodness the facility is in San Francisco. Caesar and his crew head towards the Golden Gate Bridge and the Muir Woods, a forest of giant sequoias located close to the Pacific. 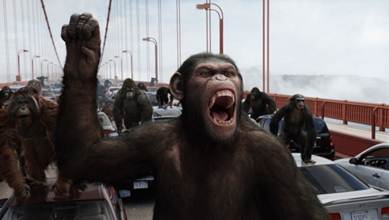 It’s a stunning reboot doing justice to the original and foreshadowing what we know will happen one day in the future.

But in the meantime, Caesar has sprayed AOZ-112 around the facility before the escape. And then, in the finale, Caesar says one word. We have transferred intelligence to another species.

The hundreds of visual effects by New Zealand’s Weta Digital is astonishing. I believed every shot even when the director, Rupert Wyatt, had to give us Caesar and the other primates emotional feelings.

*I’m not a primatologist, but I have been on several African safaris. In 2007 I went on a U.K. trek to Africa. After a safari in Kenya and learning how to make fire with the Masai Mara, we went to Uganda and then in Rwanda, we trekked up the mountains (with a sanctuary guide, trackers, porters, and 3 armed guards) to visit – at extremely close range, one of the gorilla families living in the area. The 7 Metre Rule was absolutely not enforced. I was 3 metres away when a Silverback alpha male started moving towards me. Our guide shouted for our small group to sit with our heads down. The Silverback brushed past me. It was quite a moment!

The trackers communicated with our guide by walkie-talkie. There is a special sound that the guides and trackers made that constantly communicated to the gorillas that we humans were friendly and would not harm them. (It was a sound we started to use constantly on the rest of the tour.) We also could look directly at the females since they were not hostile. We were advised not to look into the eyes of the Silverback.

When asked why there were three rifle-toting soldiers along with us, we were told they were watching for poachers. Poachers should know that every day at 11AM groups of tourists come to see the mountain gorillas for one hour. That is exactly when poachers should be hiding out of sight. Or, considering how the soldiers kept a military style perimeter watch over us, was it for our protection?

We were told that the Rwandan local people get none of the tourist revenue. The hostility was obvious. In our group, people were spit at, had rocks thrown at them, and three people were intentionally ran off the road by trucks attempting to hit them. We did not go into town again but stayed at our Catholic campsite. Even our Kenyan guides did not go into town.

My Advice: Don’t go to Rwanda! They don’t like white people in Rwanda. I found out why and maybe they have a good reason. They still resent the Europeans for colonizing them (and the Germans for genocide and making their women sex slaves).

And, who should forget the 1994 Rwandan Genocide mass murder of an estimated 800,000 people? Over the course of 100 days over 500,000 people, as much as 20% of the country’s total population, was killed by machetes (by men, women and even children). It was the culmination of longstanding ethnic competition and tensions between the minority Tutsi, who had controlled power for centuries, and the majority Hutu peoples.