Disgruntled teen golfer meets the Yoda of golf. Learns how golf is a metaphor for Buddhism. 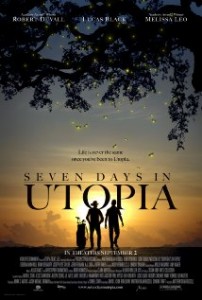 If only Moses had played golf, he would not have struck the rock twice! (Numbers 20:11) If only Napoleon had played a round of golf the morning of the Battle of Waterloo, history would have been quite different. I could go on and on.

Golf is magic. Golf puts the Universe in harmony.

And golf is a huge market to play to since there are 26.2 million active golfers in the United States. 36.7 million Americans are considered golf participants.

Teen sensation Luke Chisolm (Lucas Black) – he still lives with his parents so I guess he’s a teen – has been a golf protégé since he was 5 years old. His father Martin (Joseph Lyle Taylor) has been his trainer/caddy/disciplinarian modeled on, let’s say, Earl Woods, who had two year old Tiger swinging a golf club. 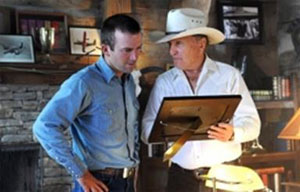 Luke is good at the game but it is all about pleasing his father. Pressured into making a pro tour, Luke freaks out on the course and is a public, unprofessional disgrace.

Luke magically crashes his car in Utopia, Texas. Millionaire rancher Johnny Crawford (Robert Duvall) just happens to be a champion golfer who now reigns over Utopia. He owns a putting green, 18-hole golf course, horse ranch, plane, Bed & Breakfast, and an art studio. Crawford was a drunk who somehow turned his life way around. He asks Luke to give him seven days to improve his golf game. 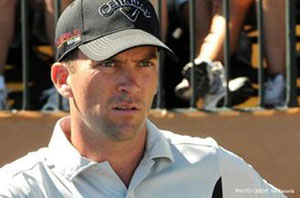 He’s the Yoda of golf!  He’s the Golf Whisperer!

Crawford is a highly spiritual man and his lessons are laced with platitudes, homilies, and a few psalms. I was waiting for the Laying of the Hands.

The director, Matt Russell, attempts, rather successfully, to give the slow-paced drudgery of watching golf into a fast-paced, explosive game. Until the final showdown, where we are non-golfers are lost in a bogey.

Unfortunately, Crawford’s lessons are one-on-one painful exercises. Will his methodology of fixing golfers blaze across the country as New Age golf workshops?

Crawford has Luke paint the anticipated route of a golf ball. Day 2, Crawford takes Luke fly-fishing. Every swing of a golf club is a lesson in Life.

But wait! There is a girl, Sarah (Deborah Ann Woll), and a trio of young men who feel threatened by the new guy in town!

Luke cries a lot (three times in one movie!), learns to change his outlook on life and thus triumph in his game, chances the course of destiny, and forgives his father. Writing credit goes to David Cook, Rob Levine, Matt Russell, and Sandra Thrift. Based on “Golf’s Sacred Journey: Seven Days at the Links of Utopia” by David L. Cook, the movie is clearly aimed at the vast golf market. For the rest of us it’s a tedious sermon.