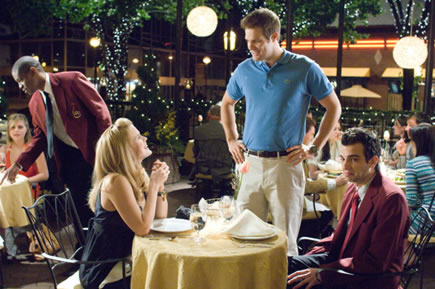 The premise of this one is that a normal guy named Kirk (Jay Baruchel) captures the heart of Molly (Alice Eve), a gorgeous supermodel-type, as his girlfriend.

Stealing every conceivable teenage convention from the Judd Apatow school of filmmaking, screenwriters Sean Anders and John Morris give it the “old college” try. The script revels in egregious vulgarity with occasional moments of civility. It will appeal mostly to teenage males who like semen jokes and acts of utter stupidity. The filmmakers included the requisite dog to lap up that premature ejaculation and parents to be there almost the instant that it happens. Director Jim Field Smith doesn’t worry very much about adhering to reality. Kirk works for the TSA and he and his fellow civil servants violate Federal law freely whenever they feel like it. You would never guess that there was such a thing as 9/11 or terrorism. Likewise, friends and family all act like Neanderthals as they encourage Kirk to play hockey in the basement or plan a vacation in Branson, Mo. With a theme that insecurity must be overcome to achieve happiness, “She’s Out of My League” achieves its goal intermittently. Unfortunately , more often than not, it is simply “in bad taste”.

She’s Out of My League – Las Vegas Premiere