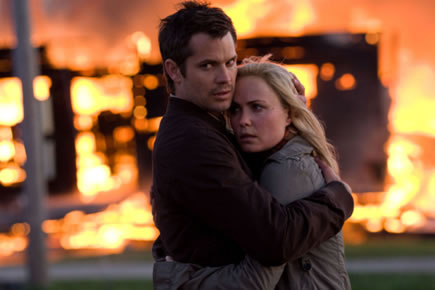 The time is right for a reimagining of George A. Romero’s 1973 horror-thriller titled “The Crazies”. Director Breck Eisner (son of former Disney CEO Michael Eisner) has skillfully updated the micro-budget original with the backing of Ricky Strauss’ politically focused Participant Company and Overture Films.

The main plot premise revolves around an accident with a virus that creates a terrifying civil emergency and reveals that the U.S. government is experimenting with bio-warfare. The main difference from the original is that rather than telling the story from the military’s point-of-view we get it through the eyes of a small town sheriff and his doctor wife. The interesting question that is posed is how can one tell who is infected and who isn’t? The virus drives its victims mad before killing them, but what is the line between normal hysteria and actual insanity? The murdering of the faculty at the University of Alabama by Dr. Amy Bishop comes to mind as a recent real life example. Second, and equally brilliantly, the film points out the impossibility of imposing martial law on a community of gun-owners. Powerful acting particularly from Timothy Olyphant as Sheriff Dutton and Radha Mitchell as his doctor wife. First rate make-up and effects overcomes somewhat weak plotting and a tendency to achieve cliché. As a remake one must count this one as a pleasant surprise.