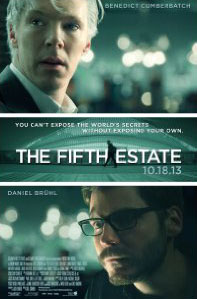 Assange is demonized and the Cumberbitches are going to be enraged.

Just who are the “Cumberbitches”? They are the tens of thousands of “the most glorious and elusive society for the appreciation of the high-cheekboned, blue-eyed sex bomb that is Benedict Timothy Carlton Cumberbatch.”  The “Cumberbitches” have launched a Twitter profile, Facebook page, a Pinterest handle, and countless Tumblrs in honor their beloved star. Cumberbatch has lost weight, got a couture wardrobe and is everywhere.

And Benedict Cumberbatch is well aware of his fans devotion and the power that “social media” (I hate that term) has. He responded to the question as to whether Julian Assange will go after him for his portrayal of the man in THE FIFTH ESTATE. He said: “I’m sure he’ll go after me. …“Anyway, the Cumberbitches have got my back, so I’ll be fine.”

Assange will not have to go after Cumberbatch. Even though he has labeled the movie “a massive propaganda attack,” it’s the screenwriter, Josh Singer, he should bitch about. And those Cumberbitches? Their fury should be leveled at the director, Bill Condon, who stages most of the scenes with Cumberbatch as WikiLeaks founder, Julian Assange, in the background.

It is Daniel Domscheit-Berg (Daniel Brühl) who valiantly comes across as honest, forthright, noble and a patriot for the freedom of information. The film starts with the birth of WikiLeaks and Assange’s zealotry to use their “hacking” skills to provide a safe place for anonymous sources to publish secret and classified information from anonymous sources. Assange enlists Bomscheit-Berg, a fellow hacker, to help develop WikiLeaks. At first, it is a two-man operation.

You can find anything on the Surface World Wide Web, but it is the Deep Web where all the real information lies. No government can control the Deep Web. This is why WikiLeaks was and is so dangerous.  Most of the Web’s information is buried far down on dynamically generated sites, and standard search engines do not find it. Traditional search engines cannot “see” or retrieve content in the deep Web—those pages do not exist until they are created dynamically as the result of a specific search. Hackers know how to do it.

The blue-eyed sex bomb Cumberbatch never slips through. All of Cumberbatch’s close-ups emphasize his double chin. Cumberbatch uses every silly smirk in his arsenal of faces. Does the real Julian Assange hang his mouth open all the time? No matter that the real Julian Assange has a Nordic sensual air about him – even if he does bleach his hair. Quelle horreur! And what about the unnecessary nasty information that Assange was raised in a cult and all the children were forced to bleach their hair white?*

The film is an intentional assassination of Assange. It’s not even subtle. The film is based on the books “Inside WikiLeaks: My Time with Julian Assange at the World’s Most Dangerous Website” by Daniel Domscheit-Berg and, at an attempt at some kind of objectivity, “WikiLeaks: Inside Julian Assange’s War on Secrecy” by David Leigh and Luke Harding. But it is surely Domscheit-Berg’s fury that paints such an unattractive picture of Assange as a ruthless megalomaniac and an enigmatic, bitter man.

It is always the pushed out partner who airs the dirty laundry and rightfully so. Forbes puts Microsoft’s mogul Bill Gates’ net worth as $72 billion. Gates has been called ruthless and a sarcastic bully by his former partner and co-founder, Paul Allen, in his scathing book, “Idea Man: a Memoir”. Allen said Gates thrived on conflict and sarcasm. In 1982 Allen contracted Hodgkin’s lymphoma and Gates betrayed his high school friend by trying to deprive him of his share of the Microsoft fortune. Allen claims he overheard Gates discussing ways of diluting his stake in the firm.

Then there is everyone’s best friend Mark Zuckerberg.

Forbes has no information on the net worth of Julian Assange.

WikiLeaks publishes 700,000 classified documents leaked by Bradley Manning on the internet and Assange becomes the face of WikiLeaks. Domscheit-Berg – remember, he’s also a hacker – suddenly finds God and morality. He realizes that Assange is dangerous and, like a furious lover who finds out her man has been cheating on her, destroys thousands of the site’s unpublished documents obtained from unknown informants before he leaves. Domscheit-Berg would have shredded Assange’s wardrobe but he was wearing someone else’s clothes.

Domscheit-Berg was on board for everything until Assange became internationally infamous and he got jealous.

With the story of WikiLeaks basically a story about documents, THE FIFTH ESTATE is framed like an action movie. Director Condon uses every trick in a filmmaker’s book to make arguing exciting. They wisely decided to focus on the relationship between the two men. However, the intent backfires since its depiction of Assange is so one-sided. If only Assange had partied Mick Jagger, had a stripper named Princess as a girlfriend, a coke habit and a shoebox filled with cash.

*When Julian Assange was 8 years old, his mother, Christine Assange, married a musician and adopted son of Anne Hamilton-Byrne, cult leader of The Family, who sanctioned the recruiting of psychiatric patients into the group and their coercion into following its precepts by the administration of LSD, electroconvulsive therapy and even brain surgery (conducted by physicians who belonged to the group). Does this mean that Julian was given LSD (the experience of choice for my Beatles/Timothy Leary-led generation), shock therapy or brain surgery as a child? Assange has denied he was ever in a cult.

** By most accounts prior to his current living arrangements, Assange maintained an austere lifestyle, supporting himself on donations and overnighting in a succession of friends’ spare rooms. Miss W, one of the two women making sexual assault accusations against Assange in Sweden, had to pay for his $15 train ticket to her apartment after they met because he had no cash. The next morning they parted on friendly terms with Miss W buying Assange his train ticket back to Stockholm. Since June 2012, Assange has been living in a small room in the Ecuador embassy in London. There is round-the-clock guard outside the embassy to insure that Assange does not escape.