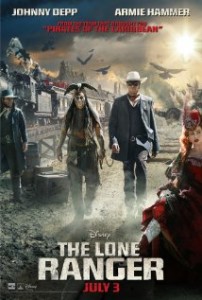 Director Gore Verbinski (“Pirates of the Caribbean”, “Rango”) and Mega-Producer Jerry Bruckheimer try to launch another blockbuster-franchise with “The Lone Ranger” but, instead, squander a quarter billion Disney dollars on a ill conceived film which lacks a coherent story and consistent tone.  It does have some exciting scenes which are spectacular in their conception and execution, but the 149 minute running time is exhausting and inexcusable. The biggest problem is the lack of story in the script written by veteran scribes Justin Haythe, Ted Elliott and Terry Rossio which poses a revisionist adventure in exploring the origins of The Lone Ranger, who entered our popular culture via a network radio series from the 1930s through the mid 1950s.

The problems in the script become evident from the start with an unimaginative framing device stolen from “Little Big Man” (1970). This “device” pops up throughout the film and insures that the narrative never gets off the ground.  The driving force behind the conceptualization is the idiosyncratic comic characterization of Johnny Depp as Tonto which occasionally hits  a humorous bit but our eponymous hero played by up and coming Armie Hammer never hits stride until the last 20 minutes of the film. The first of several train sequences deals with delivering notorious outlaw Butch Cavendish (a mean and evil looking villain, William Fichtner) to justice contains thrills and excitement that the sputtering and convoluted film can not sustain.

An attempt is made at building a story about Butch’s grab of the West’s richest silver mine but it never seems to emotionally amount to much and the manifest destiny white’s killing Native Americans with Gatling guns for sport is not in keeping with the Disney brand. The pleasures of scenery in Monument Valley and other beautiful locations is the film’s plus side as is Hans Zimmer’s score which evokes Ennio Morricone.

The film is truly a disappointment and joins “After Earth” and “White House Down” as one of the biggest bombs of the Summer of 2013.