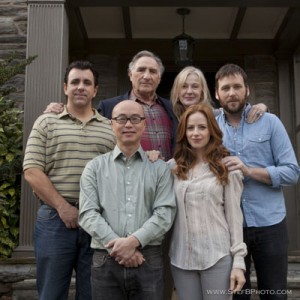 Director Michael Z. Wechsler’s “Red Robin” officially debuted at the Montreal Film Festival to positive buzz. It is a psychological thriller which reminded me of the classic “The Celebration” by Thomas Vinterberg as a dysfunctional family gathers together as its patriarch faces imminent death from ill health.

The patriarch is a Nobel Prize winner named Dr. Nathanial Shellner (a wonderful Judd Hirsch) whose work with war refugees escaping from horrible circumstances has brought him both fame and fortune.  Dr. Shellner is 75 years old, dying and wishes to say good-bye to his family in as intimate and heart-felt way as possible. He is surrounded by his dear wife named Lillian (Caroline Lagerfelt), his biological son Leonard (Joseph Lyle Taylor) and his five adopted children from all around the world.

As the story unfolds we notice a dramatic turning point as the seemingly tranquil New Jersey home becomes electrified by Tommy(Ryan O’Nan)one of the adopted sons. Tommy, an author whose work focuses on the supernatural, indicts his father for war crimes likening him to the mad Nazi doctor Josef Mengele.  Tommy implies that all the adopted children were part of a “mind control” experiment carried out by the doctor. Other children begin to corroborate Tommy’s assertions and we gain a sense of fascination about Shellner’s somewhat strange history.  An old bomb cellar in the yard adds to the intrigue. The evening spins down into a long night of revelation and accusation.

What makes the “Red Robin” compelling viewing is the strength of its ensemble acting and the way it reveals its secrets.  You really are never sure where things are heading until the final act.   The style and story build on one another.  The script is well executed, and the long day’s journey into night is impressive.