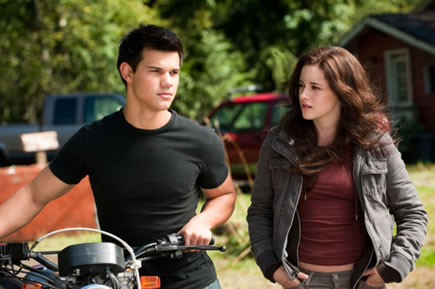 With teens fueling a world-wide feeding frenzy, this third installment of the predicted five-part franchise could easily go north of a billion dollars at the box-office.  The good news is that this edition is the best so far and fulfills expectations of a complete movie.

The cast and characters are unchanged with the conflicted heroine portrayed by Kristen Stewart, Robert Pattinson as the ever pale faced and earnest Edward, and, Taylor “The Situation” Lautner as the shirtless wolf- boy with the “hots” for Bella.  There is a tad of humor built into the line “doesn’t he own a shirt” uttered by Edward reflecting upon the appearance of his rival.  This time “bad” wigs, and, Ms. Stewart’s sense of shyness make her ability to covey emotion somewhat trying. But, this awkwardness in front of the camera strangely allows her to connect with her teen constituency. Under David Slade’s consistent direction the timing and delivery of scenes appears properly paced. Bella’s police chief father, Charlie (Billy Burke) shows parental ineptitude as he laughingly “grounds” his daughter as she is courted by “super natural” beings. What changes up the dynamic in this one is that a group of vampires is terrorizing Seattle and they catch a whiff of Bella’s scent and are heading for bucolic Fork. The alliance that forms to keep Bella safe by the werewolves and vampires adds a level of complexity unseen in earlier iterations. As this one concludes, Bella’s high school graduation looms ominous in the near future.  Stay tuned.