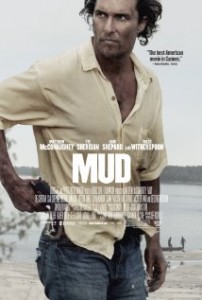 Jeff Nichols is a writer and director from Little Rock, Arkansas.  His feature film debut, “Shotgun Stories”, premiered at the 2007 Berlin International Film Festival.  His second feature, “Take Shelter”, premiered at the 2011 Sundance Film Festival and was part of Critics’ Week at the 2011 Cannes Film Festival, where it was awarded the Grand Prix. “Take Shelter” was ranked number one in FFT’s Top 10 for Sundance 2011. “Mud”, his most recent film, premiered in official competition at Cannes last May and is another outstanding effort.

The film stars Matthew McConaughey as a charismatic drifter  named Mud  in a coming of age, life-on-the river  tale which evokes the spirit of  “The Adventures of Huckleberry Finn”. Mud’s charm and  braggadocio are seen through the perspective of a couple of 14 –year olds who discover him living in an abandoned boat nestled high in the branches of a tree, deposited there by a flood.  The sensitive, soft spoken Ellis(a wonderful, Tye Sheridan)   and his faithful, smart- ass friend named Neckbone(Jacob Lofland) are the two Arkansas teenagers. Mud needs their help first in securing food  and later in fixing the boat and re-connecting with his bi-polar and flirtatious girlfriend (an intense ReeseWitherspoon).

The film also stars  a staple of Jeff Nichols’s films—Michael Shannon,  in a small,  but significant role.  The story has a powerful driving force of a blood feud  and revenge  which drive the narrative and keep you unsure how it will all play out. Photographed with meticulous craftsmanship by Adam Stone, the river becomes a character in this tale of love and its vicissitudes. With its natural performances  and its sense of spontaneity, “Mud” is a small but surprising pleasure with all the original flavor of a classic motion picture. It is a must see for your viewing pleasure.