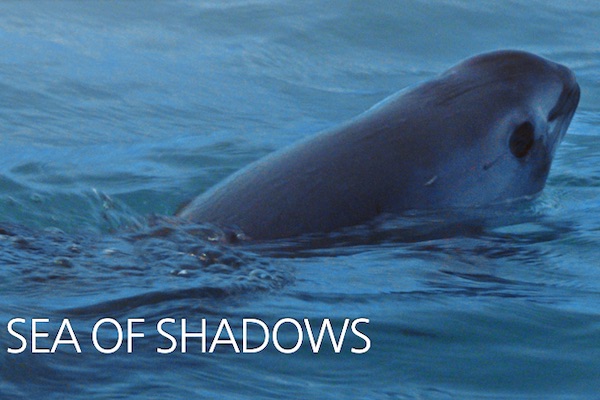 Wow. I’ve never started a film review off with a “wow,” but Sea of Shadows definitely deserves one, because it was by far the best documentary that I saw at this past Sundance Film Festival. I just watched it and as I write this review I’m still in awe. It’s a dramatic thriller that taps into people’s different emotions: happy, sad and angry. The opening credits – where the S in “Sea,” the O for “of,” and the S for “Shadows” are all in red, spelling S O S – is compelling. I loved everything about this beautifully shot film, from the sound design, editing, cinematography, direction, production, music and more; everyone gets an A+.

Sea of Shadows is about a special group of people – journalists, conservationists, veterinarians, under cover investigators from the Elephant Action League intelligence unit Black Wolves and a drone pilot on the Sea Shepherd – who are trying to save the world’s smallest porpoise, the vaquita. It is being trapped in nets dispersed by fishermen hoping to catch the totoaba, aka the “cocaine of the sea,” a fish in high demand by the Chinese because they want to eat its bladder, thinking it has healing powers, which it doesn’t; it’s just traditional Chinese medicinal folklore. There are only around 15 vaquitas left in Mexico’s Sea of Cortez because they’re victims of Chinese fish traffickers working with criminals from the Sinaloa Cartel who violate Mexico’s laws to get their hands on the totoaba’s bladder.

Mexican journalist and TV news anchor Carlos Loret de Mola is determined to save the vaquita,  Mexico’s native porpoise, from extinction, and is willing to risk his life to do so. Together, Sea Shepherd, Elephant Action League and the Vaquita CPR (Conservation Protection and Rescue) work hard to save the animal and expose the Chinese criminals in Mexico who are in cahoots with the cartels to get their hands on as many totoaba as they can, because their bladders sell for $70,000 dollars in China. God Bless the Sea Shepherd for patrolling in the Sea of Cortez, and thank you to its funder, John Paul DeJoria, for trying to protect the vaquita, totoaba and all the fish in Mexico’s Sea of Cortez by removing an astounding 800 nets from this spectacular sea.