It has been a long accepted article of faith that music can transcend time and space and jog the mind to realizations and awakenings. Music therapy has become one of tools used by professionals to treat those with memory loss due to disease, braiin tumors or simply old age. The power of music to heal is at the core of the new American indie film THE MUSIC NEVER STOPPED, the directorial debut of producer-turned-director Jim Kohlberg. The film made its local premiere last Thursday as a special screening at the Jacob Burns Film Center, the inestimable arthouse cinema north of New York City in Westchester County. Kohlberg was present to discuss the inspirations and challenges in making an intimate film on a shoestring budget. 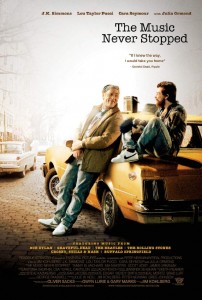 The central drama in the film is the reconciliation of a father and son through this healing power of music. J.K. Simmons (the “cool dad” in JUNO) plays a very different role. He is Henry, a straight-laced engineer who clashes with his hippie teenage son Gabriel in the tumultuous decade of the 1960s. The term “generation gap”, one that hasn’t been employed in recent decades, figures strongly, with father and son on different  sides of a cultural divide (the father loves big band “elevator music” while the son is influenced by rock n roll and confessional folk rock ballads of the times). After a particular falling out, they become estranged and do not see each other for almost 20 years.

The film shifts to 1986, when the son, played with a sensitive core by Lou Taylor Pucci in his first significant role since THUMBSUCKER, is discovered wandering aimlessly on the streets of Manhattan, unable to function and to remember who he is due to a serious brain tumor. Music, one of several things that the volatile father and son fought about, also holds the seeds of reconciliation, as the conservative father moves otuside of his comfort zone to learn to love the music of The Grateful Dead, The Rolling Stones, Buffalo Stringfield and other seminal rock artists of the era.

The film is  based on  “The Last Hippie,” an essay by Dr. Oliver Sacks, whose best-selling books about psychological oddities, including his award-winning AWAKENINGS, which served as the source material for the popular 1990 film starring Robert De Niro and Robin Williams, have always intrigued film artists. While this film may have altered some of the names and the facts in the story, it remains true to the idea of music as a gateway into memory. “A friend of the screenwriter sent me the essay”, Kohlberg explained in a post-screening interview with Jacob Burns Film Center Executive Director Steve Apkon. “When I read it, I just knew that I had to do it. I had found the film for which I would make my directorial debut. The story featured such great characters and conflicts and it coincided with my interest in “brain books”.

The script, which was completed almost 15 years ago, had trouble moving into production because it was assumed that access to the iconic music of some of rock’s most prestigious bands would be out of reach of the modest budget the film had cobbled together. “We thought that rights clearance would be a nightmare, but once we got the script to representatives for Bob Dylan and The Grateful Dead, they were so impressed with it that they offered the rights at a very reasonable amount of money”, Kohlberg explained. “After we got Dylan and The Grateful Dead on board, we were able to convince the rest of the music community to support our efforts.”

Music clearances aside, the film required subtle acting from its leads and supporting cast, including Julia Ormond as a progressive music therapist. “I had experience working with actors in the theater and for me that respect carried over into this film project”, Kohlberg continued. “The technical side of filmmaking was already known to me as a producer and I made sure to storyboard nearly the entire film so that I could get things moving when we actually were on set.”

The author Oliver Sacks has been supportive of the end result as well, doing interviews for news media and being present for the film’s premiere at the Sundance Film Festival. “We were lucky that we went into Sundance with a distribution deal already in place, with specialty distributor Roadside Attractions“, Kohlberg stated. “This allowed us to use our valuable time at Sundance to promote the film rather than finding a distributor on site. I feel that the momentum that we built up since January will make a real difference with the release of the film.” That release, in fact, was this past weekend, with the specialty story hopefully gaining strong word of mouth from the Jacob Burns Film Center screening and media campaign.

“We have been using all the tools of social networking to get the word out and get a strong showing on our opening weekend”, Kohlberg concluded. “It is so crazy that after 12 years of developments and all the time shooting, editing and clearning the music rights that the film’s future depends on what kind of turnout we will have on the opening weekend…..but that’s how it works, I guess.” For more information on the film, visit: http://themusicneverstopped-movie.com/