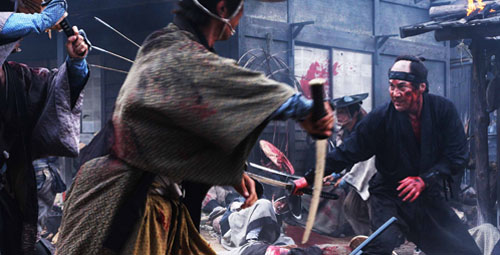 JAPAN CUTS was launched as an annual event by the  film department of the  New York based Japan Society in 2007. It  arranged co-presentations of Japanese films at the New York Asian Film Festival  followed by additional days of programs at the Japan Society. In 2009 Samuel Jamier joined the Japan Society as  Senior Film Program Officer and Curator. He has been directing  JAPAN CUTS since and helped to transform it  into the most important Japanese Film Festival in the United States. Whereas the first edition included  15 films,  the 2012 program  presented forty titles screened from July 12 – 28 and  introduced several Japanese  directors, producers and actors. The 2013 program is the last Samuel Jamier will be curating, though he continues as the co-director of the NY Asian Film Festival and will also be producing films in Korea. In 2011the name of the festival was  changed to JAPAN CUTS: The New York Festival of Contemporary Japanese Cinema. The next edition is scheduled for June 28 – July 14, 2013.

Claus Mueller     What are the objectives of Japan Cuts?

Samuel Jamier     To entertain, provoke, and show the variety of films

SJ       The selection is curated. There’s only a handful of submissions, and most of the time the films that are submitted (i.e unsolicited)    don’t actually make the cut.

CM     What is the relative shares of. public funding which you receive?

SJ       Virtually nothing comes from public funding (the info is publicly available).

CM      Do Japanese public funders/sponsors consider the important role Japan Cuts     may be playing as an instrument of public diplomacy?

SJ       I certainly hope so.  Though on the Japanese side, I don’t think film is exactly a   priority.

CM      What is the percentage share of revenue through sales of tickets?

CM       Which target audience do you try to attract and how big is it?

SJ       Young people. Or “young-ish” people – under 40, though anyone’s welcome obviously. We get around 6000, including the co-presentations with the New York Asian Film Festival (which I’m co-directing).

CM     Has it changed over the last years?

SJ       Yes, it’s grown quite a bit.  The selection used to be more “indie”-oriented. There’s still a substantial “indie” section, but I usually seek variety, and try to cover as wide a span of genres as possible.

CM      What is the rough proportion of your audience which has Japanese –American descent?

Not too many. Hard to say, maybe 10~15%. On the other hand, for some   screenings we have a large number of members of the Japanese community (long-time residents, foreign students, people who work for Japanese     corporations in the US for a few years)

CM      Japanese films are grossing less in the US than other Asian films, compared to those from India, Taiwan, China and Hong Kong. What are the reasons?

SJ        You’re right: Indian films perform very well in the US, but they have their own distribution circuit; and I guess that’s a different matter.

Japanese cinema is still both a prestigious and cool brand. It lives and prospers a lot off the grandeur of its past, particularly the 50s and 60s, its golden age. You have a larger name of recognizable names, established auteurs – from Ozu to Kurosawa.  And now you have directors like Miike or Sono, who are quite big in the international film festival circuit and perpetuate, in a way, part of this prestige.

Having said that, as a whole, I think a lot of Americans still think of Japanese films as weird or difficult, or both. That probably comes into play on any levels.  What makes some of the recent films popular (the “Asian extreme” aspect, their  weirdness or violence)  is also what limits their popularity.

CM     Do you note in general an increase or a decline of interest in Japan and its  films?

SJ       In the US, a little, yes.  In the all-encompassing category that is “foreign cinema”  here, there’s a lot of competition. New exciting productions are coming out.

CM      Do new digital platforms such as Japanflix enhance the role of your          festival as a gate keeper and would they enlarge the audience for Japanese   films?

SJ       Not sure if the festival is a “gate keeper”. I hope it’s more of a “gate breaker” in      fact.  We don’t really have a relationship with Japanflix, but it would be interesting  if my successor(s) here develop one.

CM      How do you assess the importance of other platforms such as netflix for   making the Japanese films accessible?

SJ       Tremendous, and it’s clearly biting chunks off the theatrical market, as I’m sure a  lot of people are aware. It’s pretty interesting these days, since there’s a  multiplication of this type of streaming platforms. They certainly contribute a lot to making foreign films – not just Japanese—accessible to a wide audience.

CM      Is the US market important for Japanese directors and producers or do they generate sufficient box office in Japan, thus face less pressure  for US coin?

SJ       Yes of course. The Japan film market is still pretty big, though it’s lost second  place to China and is now the 3rd largest market in the world.

Japanese film companies haven’t really been successful at penetrating the US market (they were a bit more aggressive around 2007~8)., but that doesn’t mean  there’s less pressure for international sales.  Interest – from local companies – has simply declined a great deal.

CM      What are the biggest challenges you experience?

SJ       Here in New York, you’re in competition with pretty much everything else,  culturally, and it doesn’t matter if it’s film, music, opera. There’s so much going on, ALL the time. That’s a very tough environment to work in. Also, obviously, working in a mid to large-size institution (or should I say, bureaucracy) can be very constraining at times.