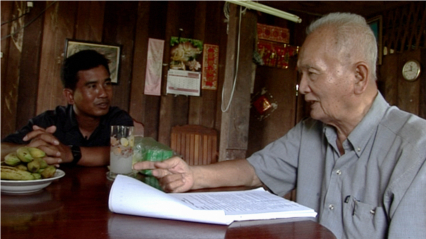 It is always a leap of faith to go into the heart of darkness, but the rewards can be great. This sentiment comes to mind with the release this Friday of one of the most harrowing and compelling personal documentaries of the year. ENEMIES OF THE PEOPLE exposes for the first time the truth about the Killing Fields and the Khmer Rouge who were behind Cambodia’s brutal genocide of its own population. The film recounts historical facts through the personal journey of journalist/filmmaker Thet Sambath, a witness to the events of horror. However, the film is not simply a history lesson, but serves a profound meditation on the nature of good and evil and the transformative power of forgiveness.

The film has been a major cause celebre on the international film circuit, winning many festival awards, including a Special Jury Prize at the Sundance Film Festival, the Nestor Almendros Prize for Courage in Filmmaking at the Human Rights Watch Film Festival and the Grand Jury Award at the Full Frame Documentary Festival. It is also unexpectedly beautiful in its execution, chilling in its insight and an example of deeply personal documentary filmmaking. The film opens at New York’s Quad Cinema on July 30th via specialty distributor International Film Circuit. It will be a rewarding experience for those willing to take the journey.

To view a trailer and find out more about the film, visit: www.enemiesofthepeople.com

Posted in: Breaking
Tags: cambodia, documentary, enemies of the people