“Dialogue and negotiations are preferred as instruments for resolving even the most difficult international conflicts.”
Nobel Peace Prize Announcement, President Barack Obama, October 2009

…Shouldn’t you commemorate this kind of courage, this option of living side by side with those who gave up their lives?
Merav Michaeli, Kasztner’s granddaughter 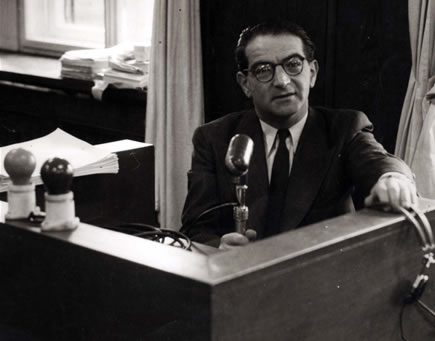 A Legacy Revised: The Case of Kasztner
How the Man Who Saved Thousands of Jews During the Holocaust Was Erased from History

New York, NY – Killing Kasztner: The Jew Who Dealt with Nazis, a new documentary by director Gaylen Ross, explores the case of Rezso Kasztner – the Hungarian Jew who dared to negotiate face to face with the architect of the Final Solution, Adolf Eichmann. While the Nazi killing machine was at its peak – 12,000 a day were dying in Auschwitz – Kasztner secured a rescue train for 1,684 Jews from Budapest, and bargained for tens of thousands of more lives.

But Kasztner’s decision to talk to the enemy left him with a tainted legacy and led to his assassination in 1957 not by the Nazis but incredibly an extremist Jew in Israel.  He was called a collaborator in his adopted homeland of Israel, in a libel case that ripped apart the nation and branded him the “Man who Sold his Soul to the Devil.” It was a verdict overturned by the Supreme Court, but like any retraction, buried and forgotten. And too late for Kasztner.

For Kasztner and those he saved, the erasure and censorship, and the politicization of the story, has been among the most cruel of punishments.  Jews were supposed to be victims during the war…or die in battle saving no one or only a few. The Kasztner model stands out from Holocaust related films from the past few years.  Most recently, Tarantino’s Inglourious Basterds portrayed a fictional account of Jews killing Nazis.  The 2008 film Defiance showed the story of a forest “village” formed to resist the Nazis.  Both films glorified the idea of “resistance” while ignoring realities on the ground.  Only Killing Kasztner is the unbelievably true and understandably controversial story of a Jew saving thousands of lives by negotiating with enemies while hundreds of thousands more perished.

“No one talks about the two million Jews who didn’t make Schindlers’s list, or the visas that Raoul Wallenberg couldn’t secure,” says Ross, who spent eight years filming this story.  “But if Kasztner is known for anything, it is not for whom he saved; rather, it is for those he lost.  But this is the story of the Jew who actually saved people.  Where is he in our museums? Is there a picture of Kasztner on the wall of Holocaust museums? Why was he not included in Steven Spielberg’s Oscar winning documentary on the Hungarian Holocaust – The Last Days? This was the most important, albeit controversial, negotiation in Hungary. How can Eichmann’s offer to Kasztner of 10,000 trucks for a million Jews be ignored?”

This is a timeless story of making the difficult decision to talk to one’s enemies when lives are stake.  It is as relevant today as it was then, with no clear answer to the difficult question.  Kasztner didn’t choose the enemy, but he did choose to save lives.  Where is his place in history?

Killing Kasztner will hold a special premiere at the YIVO Institute for Jewish Research on October 20 at 5:30 pm.  The film begins playing October 23 at Cinema Village in New York, and theatrically in major cities.