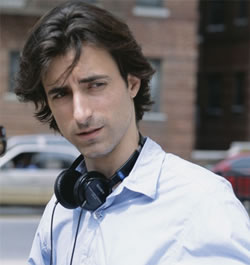 “I still consider myself a New Yorker, even though these days I have been spending more and more time in Los Angeles”, filmmaker Noah Baumbach explained on the stage of the Jacob Burns Film Center on Saturday afternoon immediately following a screening of his latest “dramedy” GREENBERG, which is set in the City of Angels. “Admittedly, I am seeing that city differently these days……maybe because my wife Jennifer Jason Leigh grew up there, so some of the things she loves about it have rubbed off on me.”

Baumbach had been invited for a post-screening question and answer session with critic Janet Maslin at the venerable Burns Film Center, an oasis of film culture in the suburbs one hour north of New York City. The 3-screen arthouse cinema complex, which presents a year-round mix of new releases and classics film in repertory, is a favorite spot for new films to be previewed for Westchester’s discerning film audiences.

GREENBERG, a delicate character study about male midlife crisis, stars Ben Stiller in the very unglamorous role of a neurotic, rather unpleasant forty-something who can’t quite find his place in the scheme of things. He comes to Los Angeles from a stint at a mental institution in New York to housesit for his more successful brother. His encounter with the brother’s personal assistant (a star turn by indie darling Greta Gerwig) pushes him to some rather uncomfortable realizations and regrets. Stiller, who started his career in similar indie projects and live theater, has become a bonafide movie star with his recent roles in big budget farces and special-effects laden gimmick movies. But he taps into a reserve of humiliation and pain in this film that has already started generating Oscar buzz. The film had its international premiere last month at the Berlin International Film Festival and is currently in theatrical release in the USA. 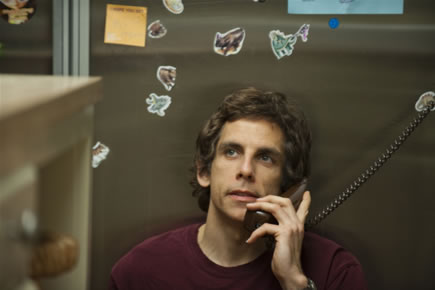 For Baumbach, a native New Yorker who grew up the son of two film critics and whose two earlier films (THE SQUID AND THE WHALE and MARGOT AT THE WEDDING) are quintessential New York tales, setting the film in the alien realms of Los Angeles was a jolt to the system. “I always loved the Los Angeles I saw in the films of people like John Cassavetes, Hal Ashby, Robert Altman and Paul Mazursky“, Baumbach declared. “But like most New Yorkers, I never felt quite comfortable out there…..but after spending time in the city and working there, I see it is as a real place with real people.”

Baumbach originally wrote GREENBERG for a younger man and had trouble finding someone age appropriate for the part. “When I was writing the script, I kept saying to myself that I wished Dustin Hoffman or Ben Stiller were younger, because they both had the qualities I wanted to give to Roger Greenberg”, Baumbach stated. “But when I was able to show Ben the script, he really connected with the part, so I just made the character ten years older, which turned out to be so right for the overall movie.” Asked about the decision to cast Stiller who has become the go-to guy for big Hollywood comedies, Baumbach said that “Ben has been dying to do something more unusual that connected with the types of parts he originally was associated with. He really plays it for real and bring all his good comic instincts to the role.”

When queried about the film’s single name title, Baumbach said that it was a kind of hommage to some of the literature that has influenced him. “I wanted to give it a one name title with a reference to the lead characters in book series that I admire like Zuckerman in the novels of Phillip Roth, Herzog in the books of Saul Bellow and the Rabbit character in books by John Updike”, Baumbach offered. “I see this film in that same literary tradition, where a single character influences and is influenced by others in his circle.”

Commenting on the current independent film scene, Baumbach declared himself to be extremely lucky. “Mid budget films that are character driven are becoming more and more diffficult to get made”, Baumbach shared. “Maybe it is because my earlier films were successes or maybe because I keep the films well within or even under their budgets, I get very little interference. I feel privileged to be in this kind of position and to be able to tell stories that appeal more to adults than to children. I won’t stop until they they tell me to…and not even then.”