LOS ANGELES, December 4, 2009 — Winners in the Feature and Short Award categories in the International Documentary Association’s 2009 IDA Documentary Awards were announced during tonight’s program, giving Sacha Gervasi’s ANVIL! THE STORY OF ANVIL its second award of the evening. The story of the band hailed as the “demi-gods of Canadian metal,” received IDA’s Distinguished Feature honors as well as IDA’s Music Award announced earlier this week. Accepting the awards with director Gervasi were Anvil’s Steve “Lips” Kudlow and Robb Reiner. 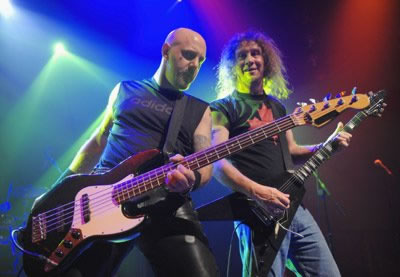 Also announced in the ceremony, which was hosted by Ira Glass, was the Distinguished Short Film Award, which honored the visually stunning SALT. Directed by Michael Angus and Murray Fredericks, SALT takes the viewer on one of Fredericks’ extreme journeys to capture the heart of the world’s most featureless landscape on Lake Eyre, South Australia.

A highlight of the evening was a tribute to journalists and documentary filmmakers from around the world who lost their lives in pursuit the truth. Introduced by Current Media’s Laura Ling and Euna Lee, who were held captive in North Korea and sentence to 12 years hard labor earlier this year, the tribute profiled Christian Poveda (1955 – 2009), Musa Khan Khel (1981 – 2009), Rolando Santiz (1952 – 2009), and Janullah Hashimzada (1969 – 2009).

The IDA is a nonprofit, membership organization based in Los Angeles. The organization was founded in 1982 to promote and celebrate nonfiction filmmakers and is dedicated to increasing public awareness and appreciation of the documentary genre. For more information about IDA visit www.documentary.org or call 213-534-3600.