Asian and European films dominated the top awards at IDFA, the International Documentary Film Festival, which held its awards gala yesterday afternoon at the historic art nouveau movie palace, the Tuschinski. The audience, made up of filmmakers, professionals and doc film buffs, loudly applauded the winners and the overall excellence of this year’s program. 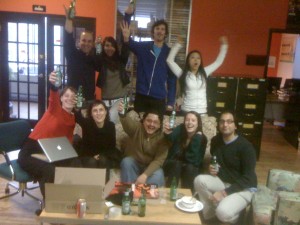 The VPRO IDFA Award for Best Feature-Length Documentary (with a cash prize of €12,500) went to Lixin Fan for Last Train Home, about the heroic journey undertaken by countless Chinese workers each year from the new industrial areas to their families in the provinces. The film, which was produced with funds from the Festival’s  Jan Vrijman Fund, impressed the jury with its cinematic technique and the strong emotional pull of the story.

The jury also awarded a Special Jury Award to Judith Ehrlich and Rick Goldsmith for The Most Dangerous Man in America (USA). The film is a portrait of Daniel Ellsberg, the man who in 1971 leaked the seven-thousand page report The Pentagon Papers to The New York Times, an act of defiance that turned the tide of public opinion against the war and eventually led to both the end of the conflict and the termination of the presidential reign of Richard Nixon.

Bong-Nam Park received the NPS IDFA Award for Best Mid-Length Documentary (€ 10,000) for Iron Crows (South Korea), about the largest ship-breaking yard in the world, which is in Bangladesh. The jury was impressed by the raw courage of the workers depicted in the film, as well as the moral stance of the filmmakers documenting their lives. The same jury awarded Marcin Janos Krawczyk the IDFA Award for Best Short Documentary (€5,000) for Six Weeks (Poland). This short documentary is an intimate portrait about the amount of time, following the birth, given to parents in Poland in which to change their minds about giving up their child for adoption.

The IDFA Award for First Appearance ( €5,000) was presented to the Irish team of Ross McDonnell and Carter Gunn for Colony (Ireland/USA), which deals with the phenomenon Colony Collapse Disorder, whereby bee colonies disappear without trace after swarming.

The first Dioraphte IDFA Award for Dutch Documentary (€5,000) went to John Appel for The Player. In this film, Appel goes in search of the essence of the gambling addiction, taking his late father as the starting point.

The Nederland 2 IDFA Audience Award (€5,000) was presented to The Cove (USA) by Louie Psihoyos. This spirited action documentary promotes the cause of dolphins, who are captured and killed in large numbers in the Japanese coastal resort of Taiji.

Sabrina Wulff received the IDFA Award for Student Documentary (€2,500) for Redemption (Germany), a film about three deserters from the American army who fled to Canada, from where they relate their memories of the – in their opinion senseless – war in Iraq.

The IDFA DOC U! Award, consisting of €1,500 awarded by a separate jury of young people, went to The Yes Men Fix the World (France/USA) by Andy Bichlbaum and Mike Bonanno. In this sharp, entertaining documentary, the Yes Men pretend to be spokespersons for large companies, using this ruse as a platform from which to criticise the free market.

Before the winners were announced, Amsterdam alderman for Culture, Carolien Gehrels, officially launched IDFA TV. IDFA TV is the online documentary channel, where more than 30 documentaries from the IDFA archives can be seen all year round, for free. Next year, the selection will be expanded to approximately 200 documentaries. Most of these films will be available free of charge, but IDFA is also planning to experiment with pay systems. The documentaries concerned will be both recent and older films that have screened at IDFA.

Festival Director Ally Derks introduced the event, announcing with great fanfare that this year’s edition would have its highest attendance figures ever. More than 165,000 audience members are expected to attend screenings through the end of Sunday. The number of international guests reached a record of 2300 this year, bringing together documentary makers, financiers and distributors from a wide spectrum of media.

IDFA is not only a festival with a mission, but it is remarkably a very public event with strong mainstream support. Most screenings were sold out in advance, with enthusiastic audiences that lingered at the various screening theaters to discuss and debate the themes in the films they had just seen. With multiple audience and professional events studded throughout the Festival, this is an experience that engages and involves the audience in a very unique way. Hats off to the IDFA team for creating such a professional and committed atmosphere that leaves one enriched, sometimes enraged and energized to fight the good fight.