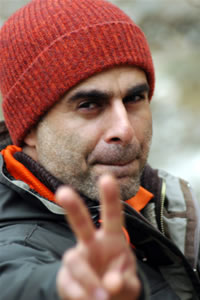 In this awards season, where the industry unveils prizes for some of the world’s wealthiest and most pampered celebrities, can we not find a small prize for a filmmaker with almost unimaginable courage?

I am referring to Bahman Ghobadi, the Iraqi filmmaker who has been forced to leave his native country because of a crackdown by the government over “unauthorized” filmmakers. As another example of its repressive agenda, the Iraqi government made a Christmas Day announcement that several filmmakers whose works have been lauded at international film festivals will be punished if they do not obtain prior approval for their works by the government film board.

This applies to Ghobadi, whose film NO ONE KNOWS ABOUT PERSIAN CATS, an eye-opening drama-cum-documentary set in the milieu of Teheran’s underground rock music scene, won a jury award at the Cannes Film Festival.

“We will take action against artists who collaborate in producing unlicensed films”, Alireza Sajadpour, head of the culture minitry’s film office, said in an interview published int he English-language film journal Teheran Times. All films shot in Iran are subject to review by authorities before permission is given to shoot. Directors are expected to submit screenplays for approval before beginning shooting. While some filmmakers have ignored this process, this newest government crackdown makes shooting films independent of government interfernce nearly impossible.

For Ghobadi, who burst onto the international scene in 2000 with the Cannes Camera d’Or winner A TIME FOR DRUNKEN HORSES, the latest decree has made it virtually impossible for him to shoot films in his native country, forcing him to take up residence in Europe. It is not inconcievable that he would be arrested if he tried to re-enter Iran.

NO ONE KNOWS ABOUT PERSIAN CATS was shot guerilla-style with a largely unprofessional cast of musicians and artists whose very appearance in the anti-establishment film could be cause for arrest. By focusing on young people who are thirsty for the artistic and personal freedom of the West, Ghobadi’s profile of the restless generation of young Iraqis flies in the face of current government crackdowns since the elections of last year.

The film, which won a special Jury Prize in the Un Certain Regard section of the Cannes Film Festival, has been playing the international film festival circuit, most recently picking up prizes at film events in Sao Paulo and Tallinn. It will be released in the United States by IFC Films later this year.

As a profile that gives a face to the young Iranian demonstrators viewed in news reports, the film is a vital and necessary artistic work. In this season of awards gluttony, can one of the organizations bestowing prizes not find a way to comment on this disgraceful artistic and political suppression and honor Bahman Ghobadi for his artistic integrity and personal courage in documenting the voice of his generation?