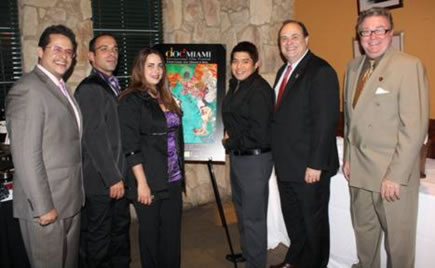 Monica Rosales, CEO and co-founder of DocMiami , believes that “Everything You Dream is Real”.

That is certainly the case for her shared vision with her brother Victor Jimenez, Founder and President, to create a major cultural event harnessing the power and popularity of the documentary film medium to showcase and spotlight attention on social responsibility issues, important causes, topics and events from around the world.

Their initial vision has been expanded to include a full Memorial Day weekend of cultural activities at the world famous Doral Golf Resort and Spa. With an initial grant from the City of Doral, in Miami-Dade County, the dream to create DocMiami has become a reality. In just a few months, over 90,000 mentions on the web have resulted in an unexpected influx of work from more than 100 directors from 30 countries.

The event includes three days of cutting edge documentary filmmakers’ showings and three nights of outstanding music concerts as a celebration of documentary filmmaking at a global level nestled in sunny South Florida.   The festival brings together emerging documentary filmmakers, students, and film and music enthusiasts in a truly bohemian, one-of-a-kind event.  Funds raised during the three evening concerts will benefit the non- profit organizationBrick by Brick Tanzania, Inc dedicated to building schools in the African nation challenged by  drought and HIV.

The official host of the event is   Tito Puente, Jr.  who will be joined by  Music Concert Director, Ivan Van Hernandez of Radio Caracol who will welcome Melton Mustafa,  of the 14th Annual Melton Mustafa Jazz Festival, Fito Espinola, the band Less Than Treason , Ivan Band and more who will be performing!   Lance Miccio, Director of Rock n’Roll Made in Mexico will be present for a special networking meet-and-greet event for documentary filmmakers at DocMiami.

Jimenez explained, “The response from the documentary film industry evidenced by support offered by the prestigious International Documentary Association and the involvement of world famous veteran documentary film director and producer Eduardo Montez-Bradley  foreshadows our plans for an increasingly popular event. Montez-Bradley has produced, directed, written or otherwise engaged in over forty films has volunteered as a Judge and as the Special Advisor to the Board of DocMiami. A special showing is scheduled of his work Calzada, a documentary based on the life and works of Cuban-American artist Humberto Calzada; a biography on life in exile, and the extraordinary means by which human tragedy becomes the canvas of a unique Caribbean experience.”

Signaling her excitement with the popularity and demonstrated early success of the event, Rosales stated,  “We have been delighted with the support we have received from non-profit and for profit sponsors alike including  our newest Strategic Alliances and Partners: The State of Florida  Governor’s  Film Office,  Miami-Dade County, Miami-Dade County Public Schools and the Doral Business Council The newest Gold Sponsor is for–profit business development agency The RaynMakers. Suggested marketing, promotion and sales strategies introduced by CEO Ray Knight to leverage all sponsors’ exposure from the event led to suggestions about using the Internet, Social media and public relations. These ideas resulted in the Board recruiting and approving the firm’s selection as the exclusive development agency for the inaugural event.

Knight added, “DocMiami is in an enviable position to attract corporate and branding partners and sponsors and we are both excited and enthusiastic about our participation and the opportunities ahead. According to sponsorship giant IEG, projections for 2009 alone indicated that $1.55 billion was to be spent on cause marketing in 2009. IEG cites survey data saying that 41% believe companies should increase their spending on cause marketing, as compared to 13% who would increase spending on sports sponsorships and 20% who would increase spending on sponsorship of cultural events. The potential is enormous and it is a win-win for all involved.”

Knight shared, “We are pleased to be assisted by our public relations strategic alliance/partner firm NMG Consulting headed by former Doral Business Council Founding Member and Chairperson, Nubielena Gomez Medina. Nubi is an enthusiastic supporter of the event as she sees that it will increase local, regional and international attention and awareness of the event and the Doral community which is good for residents and businesses alike.”

DocMiami is a non-profit entity formed to launch the annual DocMiami events. The inaugural DocMiami International Film Festival, showcasing three days of cutting edge documentary filmmakers and three nights of outstanding music concerts, is a celebration of documentary filmmaking at a global level nestled in sunny South Florida.   The festival brings together emerging documentary filmmakers, students’ grades 6-12, as well as film and music enthusiasts in a truly bohemian, one-of-a-kind event. DocMiami’s music concerts benefit the non-profit, Brick by Brick Tanzania, Inc, where performers such as: Melton Mustafa, Tito Puente, Jr.  Fito Espinola, Ivan Band and others have contributed their talents to assist school children in Tanzania whom are combating not only poverty but also a drought, hunger and the AIDS crisis.

The RaynMakers is the FIRST and only for-profit, WomenCertified business development agency in the United States. The RaynMakers exists to help clients set and achieve their top-line revenue goals by walking in their shoes, developing practical plans, then making them happen. We offer a selection of integrated services capitalizing on over 30 years of international business experience in multiple industries as both corporate executives and entrepreneurs. Our services traverse the traditional consulting disciplines of business analysis/strategic planning & execution, integrated marketing and sales. www.theraynmakers.com