Eight celebrated American and Canadian feature films by emerging filmmakers that were first showcased at such prestigious film events as Sundance, Tribeca, Rotterdam and Toronto, will compete in the North American Independents Competition of the 25th edition of FESTROIA: The Troia International Film Festival. The Festival, the oldest and largest in Portugal, runs from September 4 to 13 in the coastal resort of Setubal, giving it the reputation as the “Portuguese Cannes”.

In alphabetical order, the films include: ADAM’S WALL by Canadian writer/director Michael MacKenzie sets the classic story of Romeo and Juliet in Montreal, where the star-crossed lovers are from different religious backgrounds (specifically a religious Jew and a Lebanese Christian). ENTRE NOS, written and directed by the American team of Paola Mendoza and Gloria La Morte tells the poignant story Mariana, a Colombian immigrant, who comes to New York with her two children to join her husband, who abandons her to fend for herself on the mean streets of the big city. 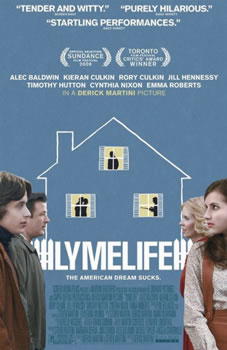 THE GOOD GUY, written and directed by American filmmaker Julio DePietro, is another New York City tale, this one focusing on the high-flying corporate culture of Wall Street that came crashing down in the past year. Scott Porter (Speed Racer) plays a cocky rising star at a financial firm, who takes under his arm an inexperienced guy who actually has a moral code, played by Bryan Greenberg (Bride Wars). LYMELIFE, the directorial debut of American filmmaker Derick Martini, uses lyme disease, a particularly nasty invasion of the neurological system, as a metaphor for human dysfunction in this poignant film about two families in the New York suburbs of the 1970s. Rory Culkin stars as a gentle boy who tries to find his way in the world, while avoiding the emotional and psychological traps that he sees in his elders, played by Alec Baldwin and Cynthia Nixon.

THE MISSING PERSON, written and directed by American filmmaker Noah Buschel, is a film noir set right after the 9/11 terrorist attacks on the World Trade Center in New York. A private detective (Michael Shannon, Oscar nominee, Revolutionary Road) is hired to follow a man who is presumed dead in the 9/11 attacks, on a train from Chicago to Los Angeles. THE NARROWS, directed by Francois Velle, a French-born filmmaker who now works in Los Angeles, is set in Scorsese territory in the Italian section of Brooklyn, New York. Rising star Kevin Zegers (The Jane Austen Book Club) stars as a teenager who must choose between the Mafia and a photography career.

In WEST OF PLUTO, the Canadian writer/director team of Myriam Verreault and Henry Bernadet take a look at what is on the brain of suburban Quebecois teenagers. This revealing semi-documentary film follows a group of 15 and 16 year olds through a whirlwind 24 hours, as it showcases the tension and casual cruelty of these young “innocents”. In the celebrated American indie film YOU WON’T MISS ME, written and co-directed by Ry Russo-Young, debut actress Stella Schnabel, the daughter of famous American painter Julian Schnabel, is a standout as the troubled young daughter of an emotionally distant mother. Setting her sights on an acting career, her volatile temper, moody intensity and taste for casual sexual encounters bring her to a crisis of overwhelming pain and anger.

Another noteworthy Canadian film is screening in the Man And His Environment competition. THE NECESSITIES OF LIFE by documentarian-turned-feature director Benoit Pilon, won the Jutra Award as Best Canadian Film earlier this year. This intimate historic tale takes place in the 1950s, when an Inuit hunter who is suffering from tuberculosis is taken to a Quebec sanatorium for treatment. Natar Ungalaaq, a non-professional actor, won the Genie Award, the Canadian Oscar, as Best Actor for his subtle but highly emotional portrayal of a man whose circumstances force him to balance his traditional ways with a foreign culture that he resists and finds lacking in human dimension. The film, which also won Canadian Oscars for Best Director and Best Screenplay, was the winner of the Grand Prix des Ameriques at last year’s Montreal World Film Festival.

For more information on the full program of the 25th edition of FESTROIA: The Troia International Film Festival, visit: www.festroia.pt