Seven Films From New York Based Distributor To Be Showcased

The New York-based production and distribution company Elephant Eye Films will be feted with a special at FESTROIA—The International Film Festival of Setubal, the oldest and largest film event in Portugal. From June 4 to 13, seven recent films from the company’s slate will be showcased. In addition, David Robinson, one of the company’s principals, will receive a special award from the Festival honoring the contributions of Elephant Eye Films in their support of American independent filmmaking.

This has been a banner year for the five-year-old company. They helped nurture a special project about a young black girl with an abusive mother who finds her own inner voice. That film, of course, is the Oscar-winning PRECIOUS, which won top awards and Oscars for its screenwriter and for supporting actress Mo’Nique, and was nominated for Best Film and Best Director Oscars (the passionate Lee Daniels). PRECIOUS is a milestone film for everyone involved with it. And to top it off, the company also represented a second Oscar nominee, the sardonic Chilean film THE MAID directed by Sebastian Silva, which also won two major prizes at the Sundance Film Festival. 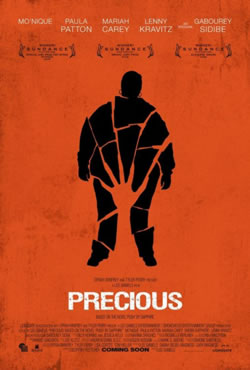 Kicking off the program on Friday evening, June 4, the Festival’s Opening Night, is PASSING STRANGE: THE MOVIE, the first musical documentary directed by award-winning director Spike Lee. He has adapted the Broadway musical PASSING STRANGE, a chronicle of the musician’s itinerant lifestyle, written and performed by the singer/songwriter Stew. The film captures the energy and essence of the live stage musical, while offering an interesting cinematic twist from one of the true innovators working in film today.

The program includes two other excellent non-fiction works. PLANET B-BOY is a kaleidoscopic look at the five incredible breakdancing crews from America, France, South Korea and Japan as they make their way to the breakdancing world championships in Germany. Director Benson Lee brings a kinetic style and a lot of warmth to the stories of these urban youth who have found a creative way to express their inner energies. In AUDIENCE OF ONE, director Michael Jacobs tells the provocative story of a Pentecostal minister who receives a message from God to produce a Biblical epic. The clash between the ideals of the religion and the vulgar realities of the movie business are expertly captured in this entertaining and enlightenting film.

The program also includes a healthy dose of drama. That is certainly the world to describe PRECIOUS, an adaptation of the novel PUSH by Sapphire….the chronicle of an overweight Harlem girl who is abused by her alcoholic mother. With the help of a supportive teacher, the teenage girl finds her own innate courage to stand up to her abusive parent and to find her own path. The director Lee Daniels has been widely praised for the intensity of the performances he wrung out from first-timer Gabourey Sidibe (nominated for a Best Actress Oscar) and comedienne Mo’Nique, who deservedly won the Best SupportingActress Oscar for her blistering portrayal of the abusive mother, who is fueled by her own inner pain.

In DON’T LET ME DROWN, an award-winning urban drama, two teenagers in post-911 New York City find tenderness and hope in one another amidst the devastation of their families and their city. Using non-professional actors who speak the true language of the streets, director Cruz Angeles brings an extreme intensity to this harsh story, while also imbuing it with a hopefulness born out of desperation. 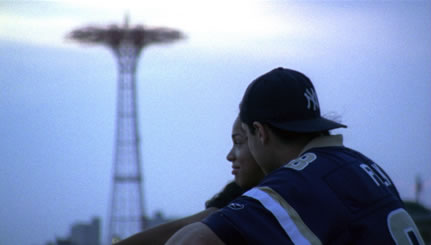 In the family drama TENNESSEE, produced by PRECIOUS director Lee Daniels, two teenagers decide to go on a road trip from their native New Mexico in search of their father, fueled by the urgency of one of them discovering he has cancer. Along the way, they join forces with an aspiring singer, played by the musical diva Mariah Carey. Director Aaron Woodley gives his ensemble cast an opportunity to shine in exquisite vignette sequences that bring out the tension and the humor in this voyage of discovery.

For his work on the satirical comedy GREAT WORLD OF SOUND, director Craig Hobel won the Gotham Award for Breakthrough Director, marking his emergence as a talent to watch. In the film, a blistering satire on the recording industry, a young man answers an advertisement that promises to train him as a record producer. What he discovers is a shady con game where all the rules are invented on the spot and integrity has flown out the window. However, his won ingenuity and sense of integrity is able to redeem him from the sleazy cesspool of lies, ambition and greed that make up this particular world. 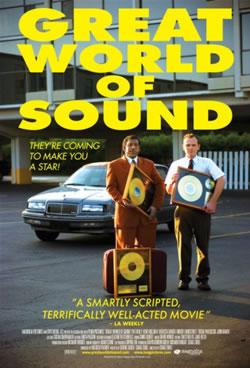 Not content to rest on its laurels, ELEPHANT EYE FILMS has a number of exciting projects in the pipeline. After the success of THE MAID, the company is representing the director Sebastian Silva with several projects, including OLD CATS, a Spanish-language drama, and SECOND CHILD, a film being executive producer by PRECIOUS director Lee Daniels. There are several features on their 2010 development slate including FRAT GIRL (director Nate Meyer), COUNTRY SONG (Tim Kirkman), THE WORLD TO COME (Dara Horn), LEAVING THE CAPE (Matthew Brown) and I THOUGHT ABOUT YOU (Noah Buschel).

In an uncertain sea, ELEPHANT EYE FILMS is keeping a clear-eyed commitment to the kind of independent films that tell compelling stories and give their audiences an understanding of deep emotion and conflict, and of that most elusive and necessary need of all, a sense of hope. Company representatives David Robinson and Kim Jose will be attending the Festival. For more information on the film and to view trailers, visit their website: http://www.elephanteyefilms.com