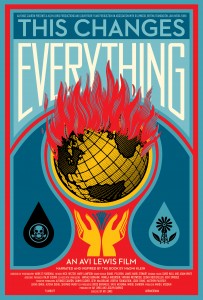 Global capitalism, which has been operating virtually unchecked for hundreds of years, often seeks growth – in revenues, profits, employment and other areas – at any cost. This comes with serious consequences for the environment. In many cases, firms destroy rainforests, uproot vegetation and pollute waterways in their quest for natural resources to fuel the economic engine. People in the past could perhaps be forgiven for operating in such an ecologically neglectful way, but now that we know about the damaging effects of failing to safeguard nature, there’s little excuse for continuing along our destructive capitalist path.

This is the central thesis of Avi Lewis’ documentary This Changes Everything. Released in 2015, the film is based upon a well-regarded book of the same name written by Lewis’ wife, journalist Naomi Klein. Klein serves as the narrator of the film as it explores the effects of corporate activities around the world and highlights the actions ordinary people have undertaken in order to fight back. Other notable individuals including actress Pamela Anderson, famed director Alfonso Cuarón and Seth MacFarlane from the “Family Guy” animated television series were involved with the project as producers.

As the powers that be continue changing our planet by stripping it of wildlife and releasing pollution into the atmosphere, it’s more important than ever that we change their behavior before it’s too late. Eschewing the eco-activist convention of focusing on animals in distress, the filmmakers have elected to show how this issue impacts ordinary human beings. Klein interviews those around the world who have been affected by oil spills, deforestation, pollution-generating coal plants and other corporate misdoings. Many indigenous people are seeing their traditional habitats destroyed while economic downturns in places like Greece are often used as excuses to build ecologically harmful industrial facilities as a means of driving job growth.

While there have been several high-profile initiatives by global leaders and influencers to cut back on emissions and promote a green-friendly agenda, Klein contends that these efforts have been either hypocritical or co-opted by the wealthy and well-connected. Instead, she envisages change coming from the bottom up: starting with those whose lifestyles are immediately in jeopardy from the actions of big multinationals. Protesters in India have successfully blocked the creation of a new fossil fuel power plant while a First Nations group in Alberta, Canada is attempting to stop the wholesale strip mining of forestland to access the oil beneath.

Traveling around the world to talk with people from diverse nations and communities gives the documentary a broad canvas to work with, but this may actually be one of its weak points. By spending only a few minutes with each subject and introducing many different stories, Lewis makes it difficult to connect with the people depicted or weave their experiences into a well-integrated whole. The tone of the film is also sometimes jarring: The somber mood invoked by scenes of terrible environmental devastation doesn’t mesh well with the upbeat, invigorating ambiance of the sequences depicting people successfully challenging the established order.

The main human activity that emits carbon dioxide is the combustion of fossil fuels for energy and transportation, and Direct Energy estimates that around 500 billion tons of CO2 have been released into the atmosphere since the beginning of the Industrial Revolution. Approximately half of this total remains in the atmosphere and is the factor most responsible for global warming. Clearly, the course we have set is unsustainable and must be altered, sooner rather than later, if we wish to leave a healthy planet Earth to our children and grandchildren.

This Changes Everything delivers a powerful message about the undesirability of current commercial and industrial practices and the need for drastic changes. The flaws in the presentation of the narrative are minor and do little to detract from the overall message of the work. Our current economic system is designed for the benefit and gratification of a small elite, while millions more see their habitats and ways of living destroyed. Concern for our environment now meshes with interest in the well-being of our fellow human beings in an effort to indict the actions of large corporate conglomerates.