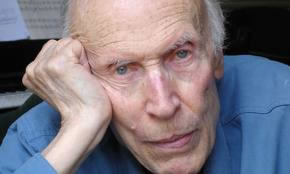 Hard as it is to believe, the summer of 2010 (the hottest on record…..thank you global warming) is coming to an end. The cranking of the film industry’s engines begin in earnest in September with the Venice, Montreal, Toronto, New York and San Sebastian film festivals…..but for the last two weeks of summer, we still can relax with the languid and liquid films of French filmmaker Eric Rohmer.

The Film Society of Lincoln Center in New York is offering a complete retrospective of Eric Rohmer entitled “The Sign of Rohmer” starting tomorrow and continuing through September 3……this should make the “dog days” of August far more tolerable. For a complete schedule of this truly special event, visit:www.filmlinc.com

When Eric Rohmer died in January of this year at the age of 89, he left behind a truly unique body of work that had put both film critics and film buffs under his spell for more than half a century. While he cut his teeth during the famed French New Wave, he always stood apart from the wily experimentation of his fellow travelers Godard and Truffaut. In many ways, his influences were more literary than visual and his films found fascination in the simple act of observing, of talking, of being in the moment. The camera often did not move and the actors were almost frozen in their stances, but the voyeurist impulse (which is at the heart of cinema) made such encounters truly fascinating and memorable. What seemed remarkably simple in style was in fact deceptively deep…..a chronicle of human foibles and human inspiration.

In celebration of his extraordinary career, the Film Center is offering the most complete North American retrospective of Rohmer’s work in more than a decade, including all of his feature films, the U.S. premiere of his 1980 TV film CATHERINE DE HEILBRONN, plus special in-person appearances by keyRohmer collaborators and admiring critics.

All of the goodies are here, including his celebrated Six Moral Tales (including the delicious CLAIRE’S KNEE and MY NIGHT AT MAUD’S), Comedies and Proverbs (including such treats asPAULINE AT THE BEACH and FULL MOON IN PARIS)and the late period The Tales of The Four Seasons. Over the course of nearly 25 films, Rohmer explored the shifting dynamics of desire and dialogue, offering the most potent exploration of the laws of attraction and revulsion in what is comically called “the war between the sexes”.

Aside from the Rohmer oeuvre, there will be a rare screening of the 1994 documentary ERIC ROHMER: Preuves à l’appui byAndré S. Labarthe and Jean Douchet, which offers a rare peek behind the curtain of at the master’s creative process, providing access to the notoriously private director as he talks about his life, his work and his muse. From his 1959 debut filmTHE SIGN OF LEO through his final film TRIPLE AGENT in 2004, Rohmer explored the delicate vibration of human emotion and the conflict between the mind and the heart in ways that remain universal and timeless. To misquote that other great existential lyricist William Shakespeare: get thee to theWalter Reade Theater……beauty awaits and it is fully air conditioned to boot.