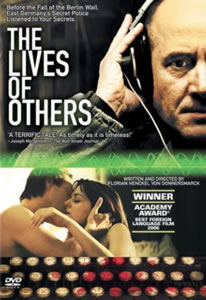 Among the top foreign language features shown in the United States from 1979 through 2009 which grossed $1,3 billion dollars, German productions ranked seventh behind France, Taiwan, China, Italy, Mexico, and Spain with a total of $49 million. Only five German features generated more than $5 million in the US: DOWNFALL, NOWHERE IN AFRICA, RUN LOLA RUN, LIVES OF OTHERS, and the commercially most successful one, DAS BOOT, a 1982 release, which scored $11.5 million. It may very well be that the relative decline of German films in the US is compensated by greater success in other territories, specifically the European Union resulting in a declining appeal of the US market. Over the last years the European and German film business experienced surprising growth rates with respect to the size of the audience reached, box office results and number of productions.

2009 was a banner year for the 27 countries of the European Union with 981 million tickets sold, a box office total of $6, 27 billion, a 12% growth compared to 2008, and 1,168 feature films released. The European Union has become after India the second largest film producer in the world (or if Nigeria is included the third largest). Increase in the quantity and quality of film productions has undoubtedly been achieved in part because of the EU’s sophisticated public subsidy system. In 2009 German films had a domestic market share of 27% only surpassed by France with a market share of 37.1%. Yet for the first time in recent history, Germany occupies the first rank of all EU film producing countries releasing 194 feature films followed by the former leader France with 182 films.

In the US the East and West Coast are prime target areas for foreign film marketing because of the heavy concentration of upscale culture oriented audiences, institutions of higher education, venues for showing foreign language films, and their cosmopolitan orientation. Other markets of interest are areas with a high ethnic residential concentration of individuals still adhering to their language and culture of origin. This includes for example the Detroit region with a strong concentration of Arabic speaking groups. In their acquisition of theatres and multiplexes and marketing of Indian films in the United States and elsewhere Reliance MediaWorks and Reliance BIG Pictures concentrate on areas with large residential populations from South East Asia. Reliance is also the only production company I know which customizes its films for foreign markets. Thus special and shorter versions of THE THREE IDIOTS and KITES were produced for the US and European markets. Such approaches are not feasible for German films given the assimilation of individuals of German origin in the larger US population. Nor can German films rely on the subsidies provided by French agencies for the marketing of their films in the US as part of the public diplomacy effort. After all for France the propagation of French culture, thus film, still remains a national priority item. Given the scarcity of funds, German films must rely on German cultural centers, the Goethe Institutes, and US institutions with New York’s Museum of Modern Art as the most prominent one.