September 20, 2009 – The Weinstein Company (TWC) is pleased to announce Quentin Tarantino’s INGLOURIOUS BASTERDS surpassed PULP FICTION at the box office and is now the filmmaker’s highest grossing film ever.  INGLOURIOUS BASTERDS has now grossed over $108 million in North American box office receipts since its initial release on August 21, 2009. 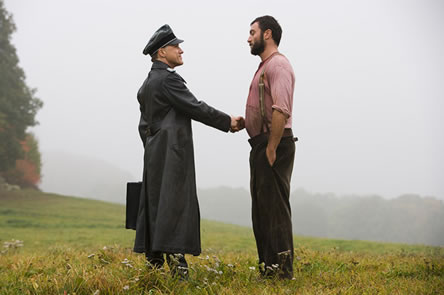 PULP FICTION, previously Tarantino’s best North American performance, took in $107,966,120 in its North American release.  INGLOURIOUS BASTERDS is an international success for TWC and its partner, Universal Pictures.  The film opened at #1 in the US and around the world on August 21, 2009.

“We have been Quentin’s biggest fans since the beginning.  It was extremely gratifying to see ‘Inglourious Basterds’ put up such huge numbers.  It is a kick ass film from a director who always keeps me and audiences on their toes, said Harvey Weinstein in response to the new benchmark.

Weinstein credits the success to a first rate film and an innovative marketing plan.  The film was the first to make use of Twitter and other social networking sites in such a direct fashion, even involving Twitter in the film’s LA premiere.  “It was great working with Biz Stone at Twitter on ‘Inglourious.’  It took the campaign to another level,” says Weinstein.

In the first year of the German occupation of France, Shosanna Dreyfus (Mélanie Laurent) witnesses the execution of her family at the hand of Nazi Colonel Hans Landa (Christoph Waltz). Shosanna narrowly escapes and flees to Paris where she forges a new identity as the owner and operator of a cinema.  Elsewhere in Europe, Lieutenant Aldo Raine (Brad Pitt) organizes a group of Jewish American soldiers to perform swift, shocking acts of retribution. Later known to their enemy as “the basterds,” Raine’s squad joins German actress and undercover agent Bridget von Hammersmark (Diane Kruger) on a mission to take down the leaders of the Third Reich. Fates converge under a cinema marquis, where Shosanna is poised to carry out a revenge plan of her own….  Employing pulp and propaganda in equal measure, Quentin Tarantino’s INGLOURIOUS BASTERDS weaves together the infamous, oppressed, real and larger-than-life stories of WWII.

The Weinstein Company and Universal Pictures, co-financed and co-presented the film with a single-pot worldwide deal split 50/50.  INGLOURIOUS BASTERDS was produced by Lawrence Bender, A Band Apart, Zehnte Babelsberg Film (a subsidiary of Studio Babelsberg AG) and GmbH Production.  The film shot at Studio Babelsberg as well as on location in Berlin, Saxony and Paris.

About The Weinstein Company

The Weinstein Company (TWC) was created by Bob and Harvey Weinstein, the brothers who founded Miramax Films Corporation in 1979. TWC is a multi-media company that officially launched on October 1, 2005. Dimension Films, the genre label that was founded in 1993 by Bob Weinstein, is also included under the TWC banner.