“The future is strange”, declared Silverdocs International Documentary Conference Keynote Speaker Tom Bernard, the co-founder and co-President of Sony Pictures Classics (SPC). Drawing on a 30 year career where he has marketed and distributed some of the most celebrated American independent and world cinema films, Bernard is one of the true film mavens with a commanding intellect and a deep understanding of the cinema business. But even for him, these are strange times. 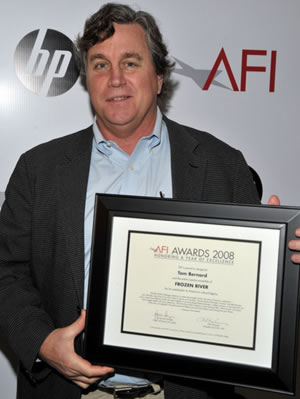 “The older audiences, 45 years and older, are walking away from theaters. They were our core audience for sub-titled films from abroad and they are still plugged into the traditional media of daily newspapers and weekly magazines. We need to find out how to reach the young generation that no longer reads newspapers but is more plugged in via the internet and mobile technology”, Bernard observed.

Sony Pictures Classics has a long tradition of releasing quality documentaries and in the past year released the Errol Morris film STANDARD OPERATING PROCEDURE, the Israeli animated documentary WALTZ WITH BASHIR, the James Toback-directed TYSON and currently has the musical doc EVERY LITTLE STEP IN THEATERS playing in theaters. In the coming months, the company is releasing SOUL POWER, the legendary concert held in Zaire in 1974 as part of the hyped Muhammad Ali-George Foreman boxing match and IT MIGHT GET LOUD, a musical doc featuring Jimmy Page, The Edge and Jack White. So, Sony knows docs…..

“Forty documentaries were released in theaters in the past year”, Bernard cautioned. “Most never cracked the $100,000 mark and were an economic loss. In my opinion, this is an oversaturation and more than the slender audiences who will go to documentaries in theaters can handle. In the theater business, the films that don’t perform after the first week are immediately pulled”.

Bernard pointed to the loss of film critics at struggling daily newspapers as part of the problem. “People develop a relationship with a critic over the years and trust their judgement. If the critic says that a film is important to see, then it obviously helps us, since documentaries do not have the budget to take big ads or television spots”, Bernard explained. “But this is where you get into the old mind versus young mind problem, because the younger audience does not read these newspapers and is not influenced by these critics. They may follow some bloggers, but their critical judgments are not always in synch.”

Bernard spent the latter half of his talk focused on the internet, both its potential and its hazards. “The internet can be an amazing promotion tool via social networking and other means, but it also can be a killer. We released a film last year called THE WACKNESS, which had been illegally uploaded to the internet at the same time it was in theaters. That film, which received great reviews and should have attracted young people to the theaters did poor business because it simply could not compete with the free version that was available online.”

He cautioned filmmakers to be in control of their films to make sure that such a thing does not happen to them, since it can devastate their chances of recouping their investments, even if in theory a larger audience sees the film for free. In general, he called on filmmakers “to be empowered by setting out your goals for your film and managing the relationships with sales agents and go-betweens like lawyers and managers to make sure that they are not just taking their cut but are doing the best for your film that they can.”

Ending on a more positive note, Bernard looks to the future when the technology will exist to customize pay-per-view networks for an individual customer’s film tastes from a vast library available online, similar to the I-Tunes model. “But this cannot be free or pirated material, because that is unfair to the makers and investors of the films. And once films are available for free online, then the ancillary revenues from dvd, VOD and other potential resources disappear.”

Bernard understands that the future belongs to the wired generation who are used to having a multitude of options for their entertainment and information. “The technology will catch up to the insatiable need for content and the revenues that can be realized will allow filmmakers to continue. But until the technology is made secure, it is a bit of minefield for companies like mine. And besides, I still want people to enjoy the films we distribute on big screens along with an audience……”