Organisers of the Melbourne International Film Festival (MIFF) have been forced to shut down online ticket sales after Chinese hackers booked out all film sessions on its website. The move is an escalation of ongoing protests over screening of a documentary about exiled Uighur leader Rebiya Kadeer. 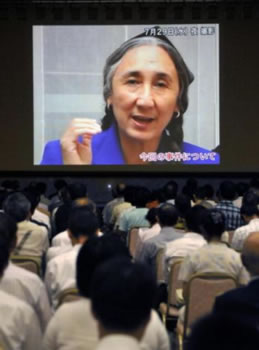 An email now circulating globally says MIFF should be sabotaged “because the festival invited Kadeer”. Ms. Kadeer is a former business woman whom the Chinese government has blamed for inciting violence between Muslim (Uighurs) and Han Chinese.  Ms. Kadeer, who lives in exile in the U.S.A., has denied any involvement.

Chinese citizens are instructed around the world on how to disrupt the festival, organisers say. Hackers broke into the festival’s website soon after the launch of the 2009 festival, replacing festival information with the Chinese flag and anti-Kadeer slogans. Six Chinese-language movies have also been pulled out of the festival, leaving organisers with a logistical headache and the fear that Chinese film-makers will boycott the festival in future.