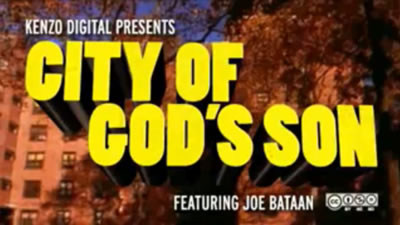 TUESDAY, JULY 21st, NEW YORK, NY – “City of God’s Son” is a revolutionary new audio driven cinematic experience by artist Kenzo Digital. A story completely created out of samples and re-appropriated audio and visual media, “City of God’s Son” stars rappers Nas, Jay Z, Ghostface, Notorious BIG, Raekwon, and actors Samuel Jackson, Lawrence Fishburne, DelroyLindo, and Al Pacino. The project has received critical acclaim from the Huffington Post, Kanye West, Complex Magazine, Fader Magazine, Nahright.com and many others. As one of the most viral and groundbreaking forms of new media art, “City of God’s Son” fuses musical and cinema mythologies into a one of a kind sound film, redefining how stories can be told and the very definition of the remix.

For the first time this unique new form of sound and video art will be exhibited for the public on Wednesday, July 29th and Thursday, July 30th at 511 West 25th Street, on the 9th floor. Each night will feature back-to-back screenings/listening sessions starting at 8:00pm, followed by a Q&A with director Kenzo Digital. There will be a rooftop party & reception throughout the night, as well as a panel discussion about remix culture with Creative Commons. The event is sponsored by Nam June Paik’s Studios, Creative Commons, Kenzo Digital Media, and Parimachari. For more information on the project please visit www.CityofGodSon.com

Additionally, a unique new viral video featuring local NY blind musicians entitled “City of God’s Son: Cinema for the Blind” will be released in conjunction with a feature article by Creative Commons on “City of God’s Son” artist Kenzo Digital. You can find the article at  http://creativecommons.org/interviews