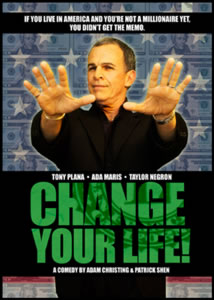 (Los Angeles, California) – We’ve all heard the phrase, “get rich or die trying” right? Now a soon-to-be-released mockumentary movie is altering that mantra to say “get rich or die laughing” about it. Change Your Life! is an independent comedy about get-rich-quick schemes directed & co-written by comedian Adam Christing.  Christing, who once got burnt himself by a network marketing Ponzi scheme, says many Americans are now broke or in debt because of get-rich-quick syndrome and he created the faux-film to show just how ridiculous these scams and scammers can be.

The funny-money movie spoof has been two years in the making and will be released on DVD on June 29th — the same day that Bernie Madoff faces up to 150 years in prison.  Madoff pleaded guilty to running the biggest Ponzi scheme in history after cheating investors out of approximately 65 billion dollars. “It’s not just Madoff,” says Christing.  “People have been ripped off by multi-level marketing scams, the Nigerian e-mail hoax, even greedy ministers.”  Christing’s film makes fun of all of the above and also pokes fun at the best-selling instant-riches book The Secret.

The Ponzi scheme perpetrator in Change Your Life! is “Simon Martinez” played by veteran actor Tony Plana.  Plana has played the villain in shows like 24, but is currently cast as the loving Dad in Ugly Betty on NBC.  Christing says that Plana’s money-grabbing character is a funny cross between Bernie Madoff and motivational speaker Tony Robbins. In one scene, a character playing a potential investor says, “I think this is a pyramid scheme.” The greedy salesman character replies, “Oh, definitely not. Here have a business card” — a business card that looks exactly like a pyramid.

And because he says the government isn’t bailing out most Americans, Christing wants to help – or at least joke about it.  Christing is giving away funny-money Trillion Dollar Bills with the first 10,000 copies of Change Your Life! which will be available via Amazon.com and on the film’s website:  www.GetRichQuickFlick.com

Copies of the movie can be purchased on the site for $14.95: www.GetRichQuickFlick.com