In its 31st annual survey of recent German film productions, KINO! 2010: NEW FILMS FROM GERMANY, from April 21-30, 2010, the museum presented 10 films with several feature length documentaries and 14 shorts. The program incorporated established directors such as Andreas Dresen, Hans Christian Schmid and Margarethe von Trotta but also new comers making their debut like Susanne Schneider and Jan Raiber. Compared to films shown at the concurrent Tribeca film festival, several productions from this recent crop of films and documentaries from German are certainly outstanding. If the quality of the film making by Schneider and Raiber can be sustained the prospects of exciting future films from Germany are excellent.

VISION by the legendary director Margarete von Trotta with a superb acting performance by Barbara Sukowa depicts the life of Hildegard von Bingen, a 12th century Benedictine nun who by all accounts was one of the first ‘feminists’ breaking existing taboos and decorum with her knowledge of science, daring interpretation of the scriptures, and assertions over male counter parts. Her defiance of male authority as presented by the clerical hierarchy and refusal to submit to traditional dictates made her a unique historical figure. VISION was picked up by the New York based Zeitgeist Films. 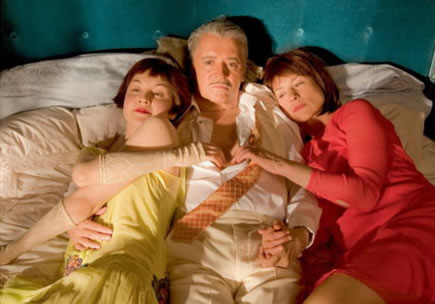 Andreas Dresen’s WHISKY WITH WODKA is a sex comedy about film making. Here the story momentum is driven by the parallel shooting of the performance of the aging alcoholic lead actor with that of his possible replacement a young surrogate actor whose presence ensures the financial investment in the film. The actor’s biographical musings, nostalgia, sexual entanglement, and the beach resort background and setting the film in the 20s make it a light fare, specifically if compared to the other German films shown in the series by MOMA.

THE DAY WILL COME by Susanne Schneider stands out of the numerous recent German films dealing with left wing Red Army faction violence of the 70s and its aftermath in Germany. Schneider presents a very well drawn psychological portrait of a woman forced to go underground and to give up her young daughter. She rebuilds an apparent comfortable existence in the vineyards of neighboring France including family and children. Her daughter suddenly shows up and forces her mother to face her past and share the truth, including a killing, with her family. The mother resolves to surrender to German justice. The film provides superb character studies of the two protagonists through excellent acting and dialogues, contrasts the utterly divergent worldviews of mother and daughter, and elaborates generation specific denial and notions of guilt. This semi-documentary family drama draws the audience into reflection and forces spectators to take positions.

Equally noteworthy were the topical documentaries in the KINO! 2010 series covering ranging from sensitive depictions of interpersonal dynamics and the mechanisms of repression as well as semi-anthropological observations of the Polish underclass. A case study of culture and politics in the Third Reich added another dimension.

Jan Raiber’s graduated with his documentary ALL MY FATHERS (Alle meine Vaeter) from the film academy Baden-Wuertemberg and presents an utterly surprising dramatic portrait of his family, of his mother, the father who raised him and the absent father who paid his child support for 18 years. When producing the film he discovers his third father the biological father and establishes contact with both of them. Driven by his quest for truth Raiber records the reaction to the evolving story by his reluctant mother, grand parents, siblings, and the two fathers who had been absent from his life. The film stays clear of the common pitfalls of biographical documentaries such as, self obsession, indulgence, exaggerations and lack of objectivity and Raiber dissects in a non-directive fashion family dynamics, cover ups and repression. He engages in a journey of self-discovery with the audience gaining a sympathetic understanding of the family dynamics which had hidden his other two fathers for so long.

DIE WUNDERSAME WELT DER WASCHKRAFT (the exquisite world of laundry power) directed by Hans-Christian Schmid documents every day work and life of semi and unskilled Polish workers, mostly women, who are employed in a huge laundry in Poland next to the German border. Operated by a German corporation paying minimum wages the laundry serves luxury hotels in Berlin. Images of the precarious underclass life style, a sense of hopelessness, of being stuck and not able to improve one’s condition intercut with scenes from several families and their desolate living environments, and their curtailed yet realistic horizons of expectations gives this film an saddening overlay. Tristesse prevails with a modicum of hope, like a grandmother deciding to look for work in England to support her son in Poland. Yet the audience learns very little about the underlying economic dynamics creating these underclass conditions and reacts emotionally rather than reflecting about the problem.

THE BERLIN PHILARMONIE AND THE THIRD REICH (Das Reichsorchester), is a spectacular, rigorously researched, and persuasive documentary by Enrique Sanchez Lansch. He investigates how this orchestra persisted through the Nazi period and was able to perform until weeks before the very collapse of the Third Reich in early May 1945 and to resume playing by late May 1945. As members of the Philarmonie the musicians had a privileged status like other culture workers who served the Third Reich, seemingly living well in a bubble unaffected by the war as the rapid reconstitution of the orchestra afterward showed. Being absolved from military service, only a couple of members perished in the war, mostly in bombing raids.

Interviews with the few surviving musicians including descendents of the four Jewish musicians who were forced to resign from the orchestra after 1933,create the impression that the musicians lived in a closed shelter of music living only for their families and performances no matter how intensive the bombing or the slaughter of their Jewish compatriots were. In that context it Jewish issue and politics were rarely discussed by the musicians, in part since there were only few Jews and about a dozen active members of the Nazi party among the 100 Philarmonie musicians (whereas in the Vienna Philarmonie half of all musicians were declared Nazis).

Furtwaengler remained one of Hitler’s favorite conductors. He figures prominently on Goebbel’s 1944 list of 1041 ‘God-gifted Artists’ crucial for Nazi culture and is among the 24 artists designated as indispensible national treasures’ for the Third Reich but resigned his position at the Berlin Opera in 1934 due to programming issues and fled Germany in early 1945. As the conductor of the Philarmonie he was able to protect half Jews and the spouses of Jews. It is noteworthy that Furtwaengler refused to join the Nazi party and that other noted conductors left Germany during the Third Reich. His official successor at the Berlin Philarmonie in 1955 Herbert von Karajan joined the Nazi party actually twice for opportunistic reasons and was also included on Goebbel’s 1944 list. These intriguing aspects in the history of the orchestra are not covered by Lansch, a minor flaw.

Given its balance and depth of research this documentary is outstanding since a large amount of new information about a controversial issue is provided and presented in an understated fashion, not to speaks of Furtwaengler’s fabulous conducting intersecting the narration.