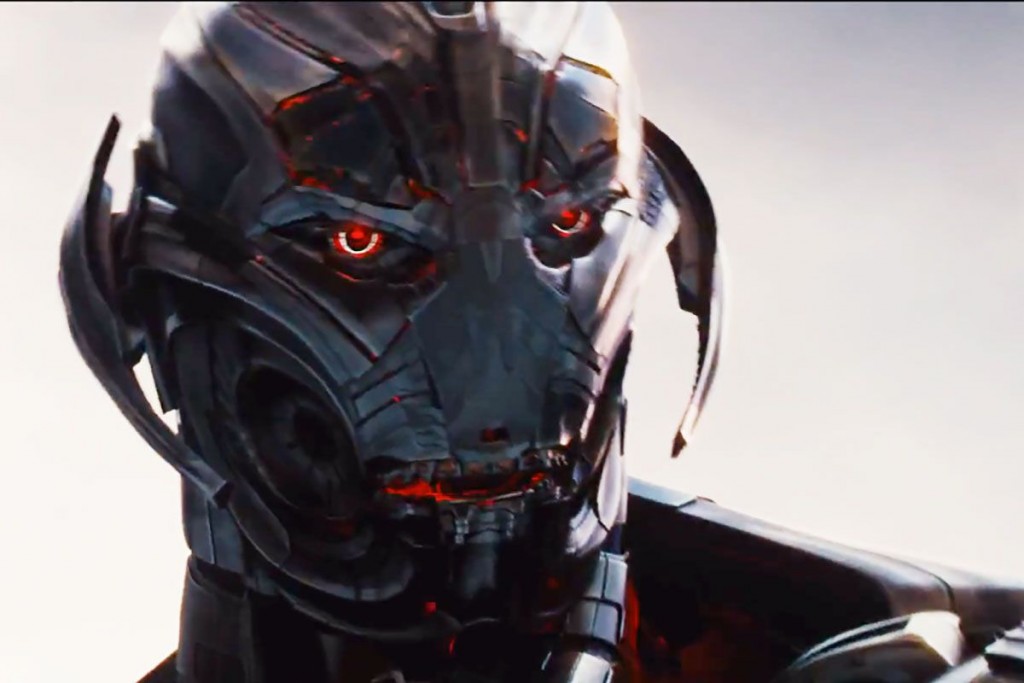 Black Widow chooses the Hulk over Thor? Females everywhere say “Huh?” The Avengers show absolutely no interest in each other. AGE OF ULTRON is soulless.

Does it matter that AGE OF ULTRON is terrible? It will make its budget plus an additional billion dollars. If you care about the price of a movie ticket, see IT FOLLOWS instead. There is more creativity, interesting characters and a terrific story in this tiny budget film that you need to support. Support it because it is really good.

Your favorite gang of Marvel superheroes are back with the one civilian without any special powers, Iron Man/Tony Stark (Robert Downey, Jr), just footing the bill for the super-advanced technology base.

All of the Avengers happen to be together to fight their enemy, Baron Wolfgang von Strucker, who has been experimenting on humans using Loki’s (my cat’s name) scepter. The aforementioned Iron Man and the Hulk are fighting alongside Asgardian god of thunder Thor (Chris Hemsworth) who is on furlough, Steve Rogers/Captain America (Chris Evans), Natasha Romanoff/Black Widow (Scarlett Johansson) and Clint Barton/Hawkeye (Jeremy Renner). Hawkeye is just there for the paycheck. It’s a job and he’s got a family waiting for him in the woods.

The Avengers encounter two of Strucker’s experiments – twins Pietro/Quicksilver (Aaron Taylor-Johnson), who has superhuman speed, and Scarlet Witch/Wanda Maximoff (Elizabeth Olsen), who can manipulate minds and throw energy blasts. Conquering Strucker’s hideout, Tony gets his hands on the scepter.

Sure J.A.R.V.I.S. is smart but…Tony feels he can enhance the technology using the scepter. Instead of just taking orders from Stark, the new and improved robot will keep the entire world safe. Tony can then work on his Plan B, a cure for cancer.

Tony needs Bruce Banner/the Hulk’s (Mark Ruffalo) help. They agree not to tell the other Avengers.

Blending J.A.R.V.I.S. with some other proto-robot technology, Tony and Bruce create Ultron (voiced by James Spader). But Ultron is no lap dog. He’s no Alfred, kowtowing to Master Bruce. Ultron has plans of his own. With humanity gone, peace indeed will be achieved.

You would think the Black Widow would at least make eye contact with Thor. A trip to Asgard as a guest of the crown prince is some hot date. There might even be sex. He’s single, right?

There is also Captain America. He’s been “on ice” for 75 years. He’d be a really grateful partner. Instead, Black Widow is propositioning out-of-work Doctor Bruce. He’s older, like Tony, and he’s got really serious anger issues, but its okay with Black Widow. She is turned on by his inability to control his anger. He is trying to stay calm with Jeff Bridges Sleeping Tapes. Jeff grunts and whistles!

Black Widow tells Bruce not to worry. She can’t have children, so his genetic screw-up will not be inherited by his offspring – if he agrees to a monogamous relationship with her.

So, after setting up a company in Delaware and buying a warehouse equipped with machinery he designed, Ultron starts manufacturing carbon copies of himself.

There is a major set piece when the Avengers meet Ultron’s army. This is the part of the movie that was outsourced to India CGI labs. A long time ago, it was called “cartoons”, now its “animation.”

By contractual agreement, time is up for the stars. They hobble out of the movie to their lairs. Tony- henpecked by Pepper-has to get back to work, Thor has businesses on Asgard that need attending, and Hawkeye is going home to build a deck. Black Widow, the Hulk and Captain America need new recruits in fancy club-wear. They have candidates so the franchise will continue with cameos by the original Avengers checking in.

If you love any of these characters, they are not presented here in their best light. Would the designated heir to the throne of an entire planet, listen to anything a guy in a flying apparatus said? And you have to walk on your toes around the Hulk. And, don’t forget, Captain America uses 1950’s curse words!

I understand this is a well-oiled machine and Marvel’s Stan Lee is dictating everything from the grave. But Joss Wheldon has earned juice. With AGE OF ULTRON he just gave up and let the animation studio and the Marvel Universe run amuck. AGE OF ULTRON is soulless.