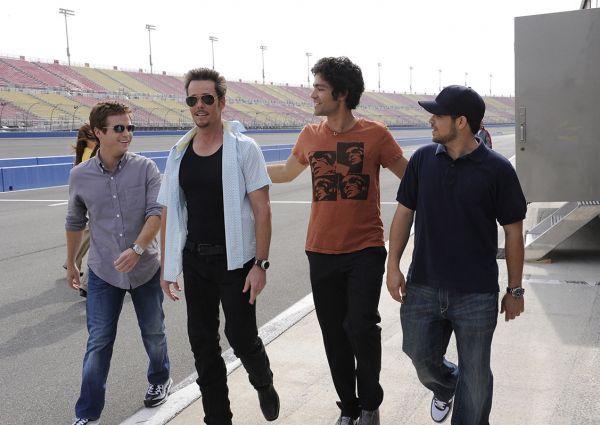 A disgrace. Every viewer will know more about the inner workings of Hollywood than the guys who made this bore. Stale, dated, and dull – except for Ronda Rousey.

I did not expect writer, producer, director Doug Ellin (who also was the HBO series creator) to do an exposé of Hollywood deal making, but with tabloids, blogs, TMZ, blind gossip (I read www.agcwebpages.com/BLINDITEMS/MAINPAGE.html every day)and constant social media updates, how can he make such a silly movie without a hint of realism?

In November, 2013, the Hollywood Reporter published a story that the negotiations for the Entourage movie had hit a big snag. It took so long because the co-stars threw a “tantrum” over Jeremy Piven’s backend compensation and salary for the film. They united – Friends-style – and demanded bigger salaries and backend compensation.

Thankfully, they fought for more money because this will not be a franchise, though with a published budget of $30 million, ENTOURAGE will certainly make money.

What is wrong with ENTOURAGE? Let’s start with the premise that Vince Chase (Adrian Grenier) is a movie star. Grenier has no charisma and apparently no ego. As the supposed celestial Hollywood body with his satellites of dedicated childhood friends, Chase is so low-key that he is often in the background – not as the star of all he surveys – but a bystander. Apparently Ellin could not nudge any sex appeal out of Grenier, so he just gave up. The cinematographer, Steven Fierberg, did not favor Grenier either and did nothing to make the women with speaking roles attractive. Swimsuit model Emily Ratajkowski did not look her best.

Vince Chase is not a sexy movie star oozing magnetism. He looks unkempt, unshaven, and not at all impressed with the thousands of topless starlets that are everywhere in Los Angeles. Guys bagging groceries in Hollywood have more sex appeal.

There is no females over 25 years old in ENTOURAGE WORLD.

The filmmakers spent lavishly on yachts, mansions, absurd sport cars, big name walk-ons and topless extras (they seemed to have hired every 5’6”, 105lb., blonde with a flat stomach in Los Angeles). How come there were so many parties in Chase’s world attended only by women?

Sure makes competition for an Executive Producer hook-up rather tough.

In a town where every good looking female is hunting for her Johnny Hyde*, when the heir to a fabulous oil fortune – a fortune that is financing the movie studio run by former talent agent Ari Gold (Jeremy Piven) and the sole investor of of the $100 million budget for Vince’s first attempt at directing – shows an interest in Emily Ratajkowski, a 2014 Sports Illustrated swimsuit model trying to get a film career in Hollywood, she treats him like scum. She actually makes disgusted faces at him!

Vince’s film has gone over budget and he needs more money to complete it. He asks Ari for more money. Ari must – the injustice of it all! – go to Texas and ask the sole financier of Vince’s movie, Larsen McCredle (Billy Bob Thornton), for more money.  McCredle is so rich he suggests the studio start all over again. He’ll pay the freight. He tells Ari he wants his son Travis (Haley Joel Osment) to return to Hollywood and report on Vince’s footage. Vince is doing a futuristic Jekyll and Hyde story but – I assume – without Mr. Hyde’s sadistic treatment of women.

Now, if this were true-life in Hollywood, every single person Travis meets would be peeing around him. Ari would be fulfilling his every wish. Ari would be supplying Travis with wishes he didn’t even know existed. They would not judge his crummy clothes, hayseed social skills and exaggerated Texas accent as deterrents. Instead, they would marvel at his highly individualistic wardrobe, his unique personality, and just love that cute way he talks. They would feast on his naiveté.

In real Hollywood this guy would have to just mention Emily Ratajkowski’s name to Ari and she would be his constant companion. She would look at him as if he was a rich, single Channing Tatum waving a movie contract at her.

Vince, Emily’s almost boyfriend, would be at Travis’s hotel room every morning serving them breakfast in bed.

Vince is still loyal to his Queens buddies who tagged along for the pot, alcohol, girls and Vince’s swag. Now Eric (Kevin Connolly), still Vince’s manager, is producing his movie; Turtle (Jerry Ferrara) – thin now – is the richest person Vince knows, and his half-brother, Johnny Drama (Kevin Dillon), continues to beg for acting jobs. Vince has written Johnny a powerful, essential role in his film. This is strange, since the HBO series always showcased a talentless Johnny Drama.

Because failed relationships and divorce mean – in the real world – that there were major problems that could not be resolved, in Hollywood movies there is never bitterness. In SAN ANDREAS, why is Dwayne still in love with his ex-wife? She looks at him like she is in lust for him. So why did they divorce in the first place? Here, Eric’s smug ex-girlfriend Sloan (Emmanuelle Chriqui) is weeks away from having his baby. He is with her for all her doctor appointments. They are not angry with each other.

Someone loves Ronda Rousey (I do too! I’m a Rousey follower and think Gina Carano has been seriously overlooked. She should be an Avenger) and got her a part in ENTOURAGE. Though her part here as Turtle’s love interest is laughable – and not in a pleasing way – she shows an ease and charm that is clearly missing from Ratajkowski. I want more Rousey and less Vince, Eric, Turtle and the crybaby Johnny Drama.

*Johnny Hyde is the man who created Marilyn Monroe.