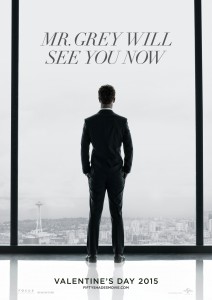 minant” – with a cleanliness fetish and no friends stalks with gifts a passive-aggressive virgin.

At least 50 SHADES is not another “Holy Crap!” Valentine’s Day movie like Ashton Kutcher made.

The powerful author of the 50 Shades trilogy, E L James, demanded a female director. She agreed to Sam Taylor-Johnson, who, according to sources, was railroaded and “dominated” the entire production by James. James’ word was imperial edict.

I read E L James’ international phenomenon but found the writing so terrible and college student Anastasia Steele so infuriating that I could not go on to the other two books in the trilogy. Especially with the foreshadowing that Mr. Christian Grey was once a slave himself – for six years. Oh dear. Ana’s entire dialogue consisted of “Ah chucks” and “Holy crap!” She was a bore and Grey’s attraction to her was preposterous.

Anastasia Steele (Dakota Johnson) is a college student and a visual virgin. When her roommate Kate (Eloise Mumford) falls sick with a cold and cannot interview the elusive, highly-private, handsome billionaire Christian Grey (Jamie Dornan), Ana agrees to go in her place. For the interview, James put Ana in Amish-wear.

Grey immediately wants her and pursues Anastasia like a lovesick puppy.

It doesn’t take long for Christian to give her the rules: he doesn’t do romance. There will be no dinners or movies, and no family invites. He sleeps alone. Ana must sign a nondisclosure agreement (just like movie stars and athletes are rumored to require from their jump-offs) and a sex slave contract.

While the sex contract is explicit, Ana cock-teases Christian to madness with her reluctance to sign it.

So Christian has to negotiate. As a signing bonus, he will throw in a weekly dinner and movie. To sweeten Ana’s coquettish hesitancy, Christian takes her on glorious billionaire playdates and takes her to a family dinner! Christian agrees to have his photo taken with her at a gala event. His first photo with a woman. And finally, he calls her his “girlfriend” and spend the entire night sleeping with her.

That’s not enough. Christian is jealous of the men in Ana’s life. He’s had a tough life. Christian is lonely and the only way he can achieve orgasm is through giving pain to a woman. If Ana wants to be his and his only, she must sign the damn contract.

So finally comes the push to shove – sign or leave. But first Ana wants to experience Christian’s worst. She goes into his Playroom.

Christian has an empire to lose so you know there is a “safe” word. If none, he would be a really stupid billionaire.

I needed to do field research. So in the early 80’s I went with Films In Review owner/editor Roy Frumkes and screenwriter Rocco Simonelli to Hellfire and The Vault in New York City. It was before AIDS, STDs and SUVs.

There was not one billionaire there. I do admit to being part of the crowd yelling “Harder.” I was trying to be inclusive. Some guys were on leases. The S&M couple on a stage were fat. Rocco saw a Teamster in a red gown. Roy was approached by a “submissive” with a bag filled of stuff. Her master had sent her over.

What is wrong with 50 SHADES? It’s touted as an S&M movie but Christian Grey is a sweetheart. He never exhibits the nasty, cruel dimension to his personality that has turned into a sadist.

And, since Christian Grey folded on so many of his rules, you know Ana will eventually have him in chains.

Perhaps a more devastating cinematic S&M relationship is depicted in Lars von Trier’s NYMPHOMANIAC: Vol II.  This film could never have been marketed as a Valentine’s Day movie (considering the 50 SHADES hysteria, Magnolia Pictures should re-release it with better marketing). Von Trier’s master sadist “K” (Jamie Bell) has no “safe word”. “K” gives masochist “Joe” cruel whippings she quickly becomes addicted to. “K” has a waiting room of women. To celebrate Christmas “K” gives her a present – the Roman whipping that was given to Jesus: 40 cruel, vicious, flesh-cutting lashings.

I love everything about Taylor-Johnson – her past film, 2009’s NOWHERE BOY and her remarkable, challenging personal life. In NOWHERE BOY, Taylor-Johnson brilliantly explored the relationship between young John and his sexually-provocative mother. She knows about privilege and suffering. Taylor-Johnson and her first husband, art mogul Jay Jopling were England’s golden society couple.  She overcame two bouts of cancer: late-diagnosed colon cancer and then, three years later, she was diagnosed with breast cancer. She underwent a mastectomy and reconstructive surgery. After going through a wrenching divorce from Jopling, she met 18 year-old Aaron Johnson. She was 43 years old. They married in 2012.

Following the big-budget formula, Taylor-Johnson gave the film a glossy, fairy tale setting. Dakota Johnson displays a genuine innocence with an undercurrent of strength – which Christian Grey – as a former submissive himself – must have responded to. But that’s not in the book. That is Taylor-Johnson’s skill. Also, she understands female eroticism.

I kept envisioning Charlie Hunnam as Christian Grey. Remember when the TWILIGHT fans got up in arms when it was rumored that Taylor Lautner was to be replaced as wolf Jacob in the sequel? The studio caved to the demands of the fans. It was a mistake. Lautner fan based has deserted him. So when over 45,000 fans of 50 SHADES signed a petition protesting the film’s casting of Johnson and Hunnam – what did the studio do? They caved and replace Hunnam.

Charlie Hunnam would have given Christian Grey that much needed edge of cruelty. Dornan seems uncomfortable in the role, though he does get away with that excruciating “dominant” dialogue without seeming silly.

Why didn’t Taylor-Johnson suggest the casting of her young husband, Aaron Taylor-Johnson as Christian Grey? Didn’t E L James see him as Vronsky in ANNA KARENINA?

Who is to blame? The principals are speaking out. It started with Vanity Fair’s story in the January 2015 issue, “The Rocky Road to the Making of the Fifty Shades of Grey Movie.”

The article stated that first time novelist – E L James – not only got as much as $5 million for the rights but a far bigger than usual percentage of the gross. James demanded and was given an astonishing deal by Universal and Focus Features that gave her the power to dominate every moment of the film. It began with James’s approval of casting, script, and choice of director. The Vanity Fair article stated that James “had her own ideas not only for the script, which she guarded fiercely, but also for the dialogue, the costumes—and the sex.”

The Hollywood Reporter than published a story that said “James was given a lot of power and has used every opportunity to flex that power.” James’s had her own idea about the ending against the wishes of the Kelly Marcel, FIFTY SHADES screenwriter, and the director. E L James who was on set every day, won every battle. Any criticism falls to James.

Currently, all of France is following the trial of Dominique Strauss-Kahn, known as DSK, the former International Monetary Fund chief. One of the two plaintiffs, “Jade” told the court she had refused to have sex with Strauss-Kahn at a sex club, “because it was a butchery.” He was allegedly on a mattress with 40 people.

DSK conceded that his approach to sex is rougher than that of most men, as he took the stand for a second day in his trial in France on aggravated pimping charges. “Through this trial, I am discovering that my sexuality is perhaps rougher than most men’s sexuality. If some women don’t like it, it’s their right. But my behavior is the same with all women,” Strauss-Kahn said.

No one would confuse DSK with Christian Grey. But DSK is the current, degenerate face of “rough sex”.