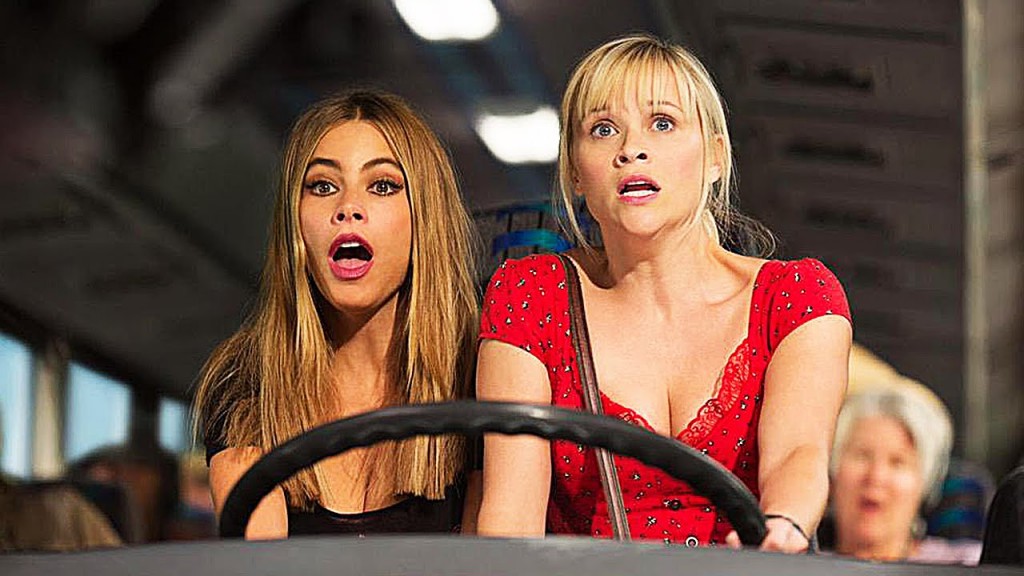 Reese, why? Comedy for you is cursed. Vergara shows she can deliver chemistry but she can now retire the accent.

Reese Witherspoon has been an actress for a long time. She has a Best Actress Academy Award for WALK THE LINE. The production company she co-founded, Pacific Standard, quickly picked up the rights to Gillian Flynn’s phenomenal novel Gone Girl in 2012.  Pacific Standard also produced Cheryl Strayed’s bestselling memoir, Wild. The GONE GIRL film did not star Reese, but WILD did. And we all thought, Reese’s career is in high gear. She’s handling mature, complicated characters now.

All female stars have the same complaint once they leave age 30 behind. Reese bitched about the lack of strong female leads on Hollywood’s agenda. She said: “I think it was literally one studio that had a project for a female lead over 30,” the actress recalls. “And I thought to myself, ‘I’ve got to get busy.”

The huffingtonpost.com (02/03/2015) began the article on Reese this way: “Reese Witherspoon is a woman who leads by example. Two years ago, she started her own production company after seeing six of her favorite actresses “fighting over a really crappy role in a movie,” she told journalists at the annual Oscar Nominee Luncheon Monday in Los Angeles.”

I’m going to pretend that Reese was either blackmailed into making HOT PURSUIT or it was really filmed 10 years ago. Because HOT PURSUIT was not made by a woman who leads by example by producing movies with strong female leads.

Everyone with a TV knows that HOT PURSUIT is a female buddy movie. It has the exact same premise as other buddy comedy movies: A straight-arrow female cop has to take a sexy witness to testify at a drug lord’s trial. They are being pursued.

However, being that the new, over 30 Reese was producing and starring, I was hoodwinked into believing that HOT PURSUIT would certainly be different.

Not only is HOT PURSUIT the same slapstick buddy comedy we have seen many times before, it even has the same beats. There is the “cool” dude to romance the shy virgin, car chases and a twist. The only thing missing was Mike Tyson.

It does have gorgeous, over 40 Sofia Vergara. Apparently, Sofia can flirt with anyone and has real charm. She really works hard trying to show chemistry with Reese. Sofia is all in. After this, Sofia should retire her Columbian spitfire character. If Robert Downey Jr (SHERLOCK HOLMES) and Jeremy Piven (PBS MASTERPIECE CLASSIC, Mr. Selfride) can do British accents, Sofia can get a dialog coach and dump her overly-exaggerated accent.

As a producer and star, it’s pretty bold of Reese to allow herself to be filmed in such an unflattering way. I’m not criticizing Reese – she is not afflicted with the Nicole Kidman Syndrome (NKS) – but there are a few noticeable shots of her that take her character, Officer Cooper, out of the naïve, 30 year old persona and show her as a very tired 40 year old.

“Not that there’s anything wrong with that.”

Officer Cooper lives her life according to the police officer’s manual. Even though she has been her cop father’s “partner” since she was an infant, every day seems like her first day on the job. A serious mistake has made Cooper a laughingstock.

Officer Cooper is sent to cop’s Purgatory – the evidence room located in the precinct’s basement. She has memorized the police manual and knows what must be done with evidence. If you do decide to see HOT PURSUIT, remember this key point because the screenwriters, David Feeney and John Quaintance, were really sloppy here. And I hate when that happens.

Cooper’s constant shrill starts to get on your nerves within minutes and it just gets worse as the movie continues.

A major drug lord is on trial and Cooper must accompany a female witness to his trail. Said prosecutor witness, Daniella (Vergara), is a Versace-styled, Scarfaced-sexpot. She insists of lugging around a suitcase filled with shoes. For her court appearance, Daniella has chosen a skin tight white dress and stilettos.

Of course, being pursued by the drug lord’s hitmen, makes for a comedy mayhem car ride.

I was hoping that they would take refuge at a serial killer’s lair and Cooper has to rescue Daniella by skinning alive the deranged psychopath. Or Daniella has to turn a few tricks at a truck stop to pay for gas.