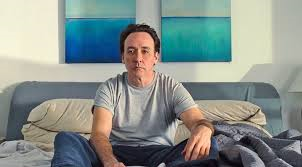 A sadist father, a sadist therapist, a severe mental illness, and a brilliant career. It’s all here without the whitewash of movies based of a real person’s life.

This is harrowing account of the well-known life of the Beach Boys’ sole architect, Brian Wilson. Sanctioned by Wilson, the film details his horrific childhood, mental illness, and the relationship with his sadist father Murry and his later sadist father-figure, the cruel Dr. Eugene Landy.

Because LOVE & MERCY uses all the great Beach Boy’s music and details what has been long known about Brian Wilson’s mental illness, obesity, refusal to tour and problems with the other Beach Boys, there is little here that is whitewashed.

Though I have not read the book attributed to Brian Wilson*, doing research has confirmed that, well, some inappropriate things were left out.

While other forms of psychoanalysis have taken primacy over Freudian psychology – which could be labelled as The Shock of the New – I found this paper immensely interesting: A Freudian Interpretation of Brian Wilson’s Life by Michael De Bernardi (http://www.surfermoon.com/essays/freud.html)

Bill Pohlad’s LOVE & MERCY not only details the early life of Brian Wilson, it delves into the later life of the musician – now recognized as a genius. From 1965-68, Paul Dano plays Brian. Inter-cutting with Brian’s life in the 1980’s, John Cusack carefully sidesteps portraying the older Brian as a drooling paranoid schizophrenic – which he probably was. During this period, Brian was seeped in a miasma of drugs and completely under the domination of Dr. Eugene Landy (Paul Giamatti).

Landy did get Brian out of bed after three years of taking drugs and eating. He ballooned to 350 pounds and refused to see anyone but his drug dealer and take-out deliveryman. After getting Brian out of bed and slimmed down, touring, and working on music, Landy saw himself as Brian and the Beach Boys messiah.

This is quite a common phenomenon. What immediately comes to mind is the similarity between Brian and Landy’s relationship to Bhagwan Shree Rajneesh and his secretary Sheela. (I was there in the early days of Rajneesh when he saw students in his small room in India; I was around for the Rolls Royce “turning back the odometer” practice. In 1981, Osho – he renamed himself – gave the powerful Sheela his limited power of attorney, removing the limits the following year. In 1983, Sheela announced that he would henceforth speak only with her; Osho later said that she kept him in ignorance and in seclusion. Sheela held complete autocratic leadership and even initiated attempts to murder Osho’s personal caretaker and girlfriend, Ma Yoga Vivek, and his physician Swami Devaraj (George Meredith) because she felt they were a threat to her sovereignty.)

LOVE & MERCY takes the viewer inside the creative process in astonishing detail – and it’s a revelation. No borrowed or stolen “beats”, no processed music, no inter-changeable singers and no auto-tune performances. A committee did not create the Beach Boys sound. Only one man did.

It’s surprising that Brian Wilson created all the music himself with studio musicians – The Wrecking Crew – men and women he praised as the best unknown talent in the music world. The Wrecking Crew indulged Brian’s every whim – no matter how many hours it took to record a note of music. They seemed to have adored him, while the other Beach Boys stood around. It is frustrated Mike Love (Jake Abel) who just wants Brian to keep turning out ditty singalong tunes that made them all millionaires.

It is during this period where the presence of Brian’s father, Murry (Bill Camp) comes to the fore. Murry is a formidable figure and herein lies the Freudian intrepretation – no matter how much success the Beach Boys got, Brian needed his father’s approval. He surpassed his father’s musical ambitions but felt guilty about it. He continued, knowing his success enraged his father. Nevertheless, he seemed to need his father belittling him.

Why was Brian the only recipient of Murry’s physical rage? The Beach Boys were made up of Brian’s brothers Dennis and Carl Wilson, their cousin Mike Love, and their friend Al Jardine.

The young Brian had his first wife Marilyn – faceless here and without an explanation for her passive role – and Murry as cruel taskmaster, insulter, emasculator, and exploiter.

The older Brian had Melinda Ledbetter (Elizabeth Banks), who would years later become his second wife, and Dr. Eugene Landy as cruel taskmaster, insulter, emasculator, and exploiter. For Brian, Melinda will become the mother-figure in his life who would never have allowed his father to beat him. No one rescued Brian from his evil father. Melinda saves him from Landy.

Landy is a monster and Giamatti never lets up. He should be commended for agreeing to take on this role that shows the character to have absolutely no moral compass. Landy is a truly evil character.

LOVE & MERCY is a tough film to watch – but according to all accounts, Brian had a more horrible childhood than could be shown here.

While Dano and Cusack conceive the role differently, both actors do an outstanding job. Both actors show real fear of Landy. Banks has the role of heroine – a goddess who does not want money or anything but Brian’s freedom from Landy. Banks is riding a wave of admiration having directed PITCH PERFECT 2 and with this understated, mature role she establishes herself in the A list league of actresses.

I worry who has replaced Murry and Landy in Brian’s life now?

*Wilson initially became a patient under Landy’s program in 1975, but was soon discharged due to Landy’s enormous fees and privileges. In 1983, Landy was reemployed as Wilson’s therapist, subsequently becoming his executive producer, business manager, co-songwriter, and business adviser. Landy went on to co-produce Wilson’s debut solo album and allegedly ghostwrote portions of Wilson’s disowned memoir Wouldn’t It Be Nice: My Own Story.

Wouldn’t It Be Nice is a controversial book in Wilson lore. It was published in 1991 during the final months of Wilson’s relationship with his therapist Eugene Landy, and covered in glowing terms the musician’s unorthodox 24 hours a day treatment. Wilson later testified in court that he had neither written nor read the final manuscript of the book, which was written by the journalist Todd Gold. I Am Brian Wilson will be published in 2015.