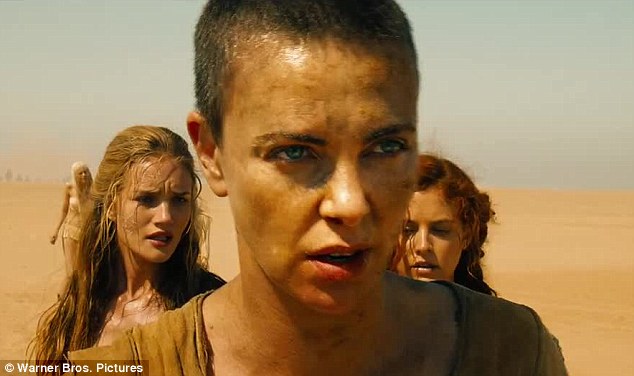 Legendary Australian director George Miller has created the first feminist- action post apocalyptic road movie with this, first time in 30 years, re-boot of the landmark “Mad Max” franchise. The film is replete with playful, experimental and outlandish, choreography of images, sounds and montage that immerse us in a world of car chases, motorcycle rides, collisions and angry confrontations, with buggies framed low to the road, the furious road unfurling in front of us and a series of ricocheting point of view shots that take us inside and outside of hot-rods and 18- wheelers

The film’s storyline picks up with Max’s (Tom Hardy) passionate new partner Imperator Furiosa (a buzz cut badass with a prosthetic arm- Charlize Theron) plotting the overthrow of Immortan Joe, a repugnant warload who monopolizes the essential commodities of water, gasoline and bullets. He’s played by Hugh Keays-Byrne who was “Toecutter” in the 1979 original. For his pleasure Immortan Joe retains five sex slaves which Furiosa liberates and places on the War Rig, the most potent fighting machine of the time, which she steals from Joe in her odyssey to a matriarchal promised land. Adding to the non-stop action are the War Boys sent to hunt down Max, Furiosa and their cabal. Also one should note that in the action scenes the women are as capable as the men as they fight in this patriarchal, violent world.

The grungy and nihilist aesthetic is the brilliant production design of Colin Gibson while the cinematography is the remarkable work of DP John Seale. “Fury Road” runs 120 minutes and is available in IMAX or Real-D-3D.