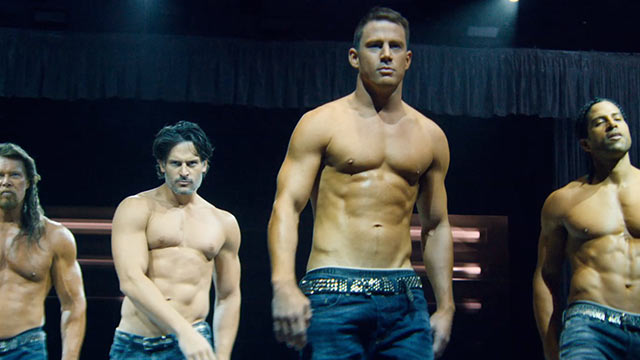 So howling terrible – it’s a must see! An insult to women – especially women past 25. Tatum’s likeability survives. The only thing missing is SHOWGIRLS Gina Gershon.

The curse of the lousy, disappointing sequel continues.

MMxxl proposes that male stripping is an artistic expression of manliness. The aim of these men is to give every woman with a wad of dollar bills the promise of a big wet kiss and an innocent pelvic thrust. They know all women want to be desired and worshiped. It’s the lingua franca of the gig.

We pick up the story four years after Mike (Channing Tatum) left stripping in Florida. He’s barely “making bank” as the owner of a woodworking and construction company. He has one employee. His girlfriend has left him.

Mike gets the urge to reunite with his buddies for a weekend of molly, beer, quick hookups, and in-the-trenches comradery. These guys actually interact with each other as if they were showering with each other for years. Well, they have been.

Each one of them would make a great “cellie”.

The guys have been rehearsing their standards routines. Mike gives them the “come to Jesus” speech. The fireman routine? Again? The Naughty Cop? The Superman costume? Again? When does the walker come out?

Let’s do a near-naked, stripped-down version of “The Rumble” from WEST SIDE STORY! We’ll be the Jets and the Sharks and we will fight over a fat, giggling Maria. You know the one whose girlfriends have a biggest stacks of dollar bills.

A day of molly ends with a literal crash and Tobias lands in the hospital for a few days. The guys spend the night at a beach where Mike meets Zoe (Amber Heard). But it’s a chaste meeting. Mike has plans to visit an old flame.

Older flame Rome (Jada Pinkett Smith) owns and hosts a male stripper club – Domina – for black women. Rome has a carnival barker’s shtick – every woman is a “Queen” to be worshipped. Domina is a grand Victorian mansion made up like a New Orleans bordello. Mike and Rome have “history”.

Rome, doubling down on old lady coquettish moves, questions whether or not Mike still has it in him. After all, it’s been 8 years since their thing.

And the new guys at Domina have the Barry White “I’m Qualified to Satisfy You” lingo down pat. There is fully clothed rapper Andre (Donald Glover), the 97% naked Augustus (Michael Strahan) who throws around a heavy girl like she’s a 14 year-old Olympic medalist in gymnastics, and Malik (Stephen Boss).

Mike’s buddies stand around godsmacked at Rome’s all-star black line-up. Mike, once billed as “White Chocolate”, has to defend his title. The floor gets covered in dollar bills.

The truly cringe-worthy part of the road trip arrives when the guys stop off at the estate of Nancy Davidson (Andie MacDowell). Celebrating her recent divorce from her wealthy husband, Nancy and her horny-sad girlfriends are so Southern even Siri couldn’t dope out what they were saying. Nancy’s daughter is friends with Zoe, who stays away from the sex negotiations between the goosed-up women and The Kings. Mike finds her eating cake in the kitchen. She’s bored.

These older ladies are so desperately hungry for men that one of them feels the need to announce she does not have sex with her husband (but she does have a black Amex card). Well, that’s an invitation for one of the guys to step up and take one for the team or, be an accommodating guest.

A shrieking Nancy, ripe and quivering, casts her eyes on Big Dick Richie. Poor Richie, he hasn’t had sex in years because he has too much…girth.

We are headed for the convention and its salty organizer (Elizabeth Banks) who questions the return of Mike to the fold and greets Rome rather too intimately.

Rome will be the guy’s MC. She continues her “Queen Rap” introductions oozing phone sex-talk. By this time, Pinkett Smith is so invested, it works. She’s all sass, honey and vinegar. And after MacDowell’s Southern Belle High-Strung Drunk, and Banks needy attempt to be noticed in her few scenes, Pinkett Smith struts her defiant self on the huge convention stage. If only there were a few other men in MMxxl, Pinkett Smith could have stripped off some of her clothes to really challenge Matthew McConaughey’s MAGIC MIKE out-there-and-not-back performance.

The final dances gives each guy a few moments in the spotlight. Tarzan does the male stripper version of an Adagio – he barely moves except to take off his shirt. For Mike’s show-stopping finish, he scoops up Zoe and – not to ignore MAGIC MIKE’S gay fans – has a homoerotic dance duet with another King and his female partner.

MMxxl was made on a relatively small budget and in a fast 28 days. MAGIC MIKE’S director, Steven Soderbergh, announced his retirement from directing in 2012. With MMxxl, he has placed his longtime first assistant, Gregory Jacobs, as stand-in director. However, Soderbergh has not relinquished control of the franchise moneymaker. He’s the film’s cinematographer, editor, and a producer.

As cinematographer and editor, Soderbergh has given Matt Bomer some lingering beauty shots. Bomer certainly is pretty. And, I don’t care what Tatum says about “forcing” Bomer to sing, it probably was the work of a powerful agent. It’s an audition for a Broadway musical! Strahan – Kelly’s daily co-star – is the movie’s real surprise. He lived his part.

Tatum has a charm that is undeniable and MMxxl is probably seen in Hollywood circles as just a guaranteed money-maker and not a blot on one’s career. Tatum showed he could act in FOXCATCHER. For MacDowell, MMxxl should keep her out of future movies but it does serve her purpose – she still looks good…for her age.