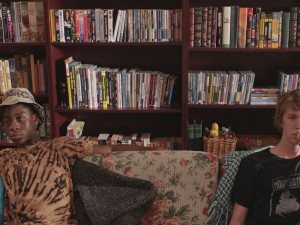 Alfonso Gomez-Rejon, a former assistant to Martin Scorsese, directs his second feature with an unerring sense of tone and vitality.   Working from a brilliant script by Jesse Andrews, who adapted his own novel for the screen, Gomez-Rejon tests your emotions and delivers a coming of age chronicle that makes you feel you’re experiencing life at its fullest. The film was a sensation at Sundance 2015 winning both Grand Jury Prize and Audience Award and was snapped up by Fox Searchlight in a high profile seven-figure deal.

The dying girl, Rachel, is played with courage and optimism by Olivia Cooke who has stage four myelogenous leukemia. The Me of the title is Greg (Thomas Mann of Project X fame) a shy but articulate and bright teenager in his senior year of high school. It is Greg’s story that drives this character- based plot as his side kick Earl(R J Cyler) acts as his closest friend as they produce parodies of famous movies with an old Bolex film camera. The titles they make-up for these films are cinephile jokes such as “Senior Citizen Kane”,”400 Bros.”. “2:48 p.m. Cowboy” and “A Sockwork Orange”.

Greg’s mom played with honest sincerity by Connie Britton persuades her son “or else” to spend time with his mortally ill classmate as a form of penance. In a self deprecating manner Greg tells Rachel it is not about her or her illness but a way to get his mother off his back that drives his actions. Greg and Earl decide to make a documentary about Rachel and in so doing gain a new perspective on what life is all about. This takes the edge off the tear-jerker aspect of the story and makes it a movie like “The Fault in Our Stars” if Michael Gondry(“Eternal Sunshine of the Spotless Mind)had directed it.

This is a film that is profound, funny and makes franchise- fueled action, adventure, illusionist filmmaking seem so empty and pointless.