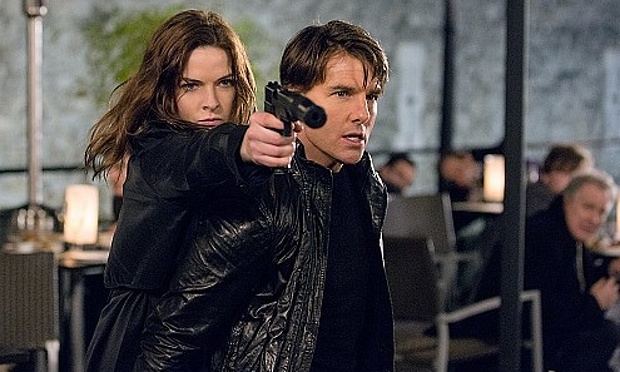 Cruise still evokes the daring recklessness that defines his MIF role. MI-5 does not disappoint.

There is a philosophical subtext to writer-director Christopher McQuarrie’s MI-5 screenplay – destiny or chance? Pure luck or simply precise planning?

In the previous outing, MISSION IMPOSSIBLE – GHOST PROTOCOL, Cruise delivered a hair-raising sequence tapping into the common fear of heights. I yelled out – I was all in when Cruise’s Ethan Hunt was hanging off that skyscraper. In MISSION: IMPOSSIBLE — ROGUE NATION (“MI-5”), Cruise once again shows his absolute dedication to filmmaking and teases the audience with another common fear – drowning.

As everyone practiced when a kid, “How long can you hold your breath under water?”

All MIF missions involve someone hell-bent on either world domination or decimating the world’s population with a nuclear bomb. Ethan Hunt (Tom Cruise) doesn’t get out of bed for less.

Even before the proper beginning of the film, we have Ethan jumping on to the wing of a military cargo plane as it takes off. I’ve been in one and they are huge.

If this is the opening sequence, what is the show-stopper going to be?

Sequels, pre-sequels, and re-imagined sequels of blockbusters are about the guarantee of fan loyalty to the characters and the bottom line: Make money. Why give away a good story in a sequel when you can save it for a possible new franchise?

Luckily, Cruise knows all too well the wrath that would rain upon him if he tried to slip a lazy Mission Impossible on his fans. (I still hold a grudge against George Clooney for admitting the Ocean sequel was lousy but promised the next one wouldn’t be – and it was!). Cruise and Company give us everything we expect in a fresh way.

If only the original template, James Phelps, had led a dissolute life of drugs and non-committal sex with ruthless women.

Finally, rogue spies have to answer for destroying cities and government buildings.  In this case, the Kremlin. During the MIF’s Ghost Protocol foray, Ethan’s team destroyed the hallmark of the Soviet republic and its surroundings, but there is now a Frank Gehry designed five-star hotel in its place. And the bill went to CIA boss Alan Hunley (Alec Baldwin). With his black budget used for building materials, Hunley wants to get his hands on the IMF and place it under his control.

Hunley already has top analyst William Brandt (Jeremy Renner) and newly suave Benji Dunn (Simon Pegg) under his thumb. So with the blessings of the government overseers, IMF falls under Hunley’s hegemony and he has only one mission – to find and neutralize Ethan Hunt.

Thank goodness there is no backstory, no emotional regret and Ethan is not brought in from the cold for “one last mission”.

Ethan is being held by the nefarious Syndicate and is covertly helped by Isla (Rebecca Ferguson), a British agent who has infiltrated The Syndicate and must constantly prove her loyalty. The Syndicate’s head (Sean Harris) keeps giving her more chances to prove herself even in light of the double and triple dealings that should question her motives. I miss GHOST PROTOCOL’S Léa Seydoux. While Ferguson is not a femme fatale, her objective and character are opaque. Frankly, the head of The Syndicate has more electric charge with Cruise than Ferguson. A stronger actress would have overridden McQuarrie’s direction and instilled some fiery determinism in the role.

Besides the aforementioned free ride on the wing of a plane, MI-5 delivers two additional exciting sequences. And they both look like Cruise actually performed the stunts with that bravado we have been accustomed to with a MIF film. There is really no need for Cruise to “hand over” the franchise and as long as Ethan’s private life stays non-existent, MI should continue as long as that other secret agent’s monolith.

Alec Baldwin called his part in. There wasn’t one piece of dialogue, one facial expression, or verbal delivery that he has not done before in many other movies. It could be the fault of the screenwriter – McQuarrie – but Baldwin is a big enough veteran to give the role something new. Why didn’t Baldwin use his well-known temper to demand a more interesting role? A supporting role should not be viewed as a paycheck.

No matter how much the tabloids cry facial rejuvenation, Cruise does not seem the least concerned with being photographed as a mature man. It’s hard to look like a Cary Grant-leading man when your face is being battered by gale-force wind. Cruise still evokes the daring recklessness that defines his MIF role. In fact, his Ethan Hunt could keep going in the franchise and follow in the same direction as latter-crowned action star Liam Neeson – though no one wants a TAKEN 3.