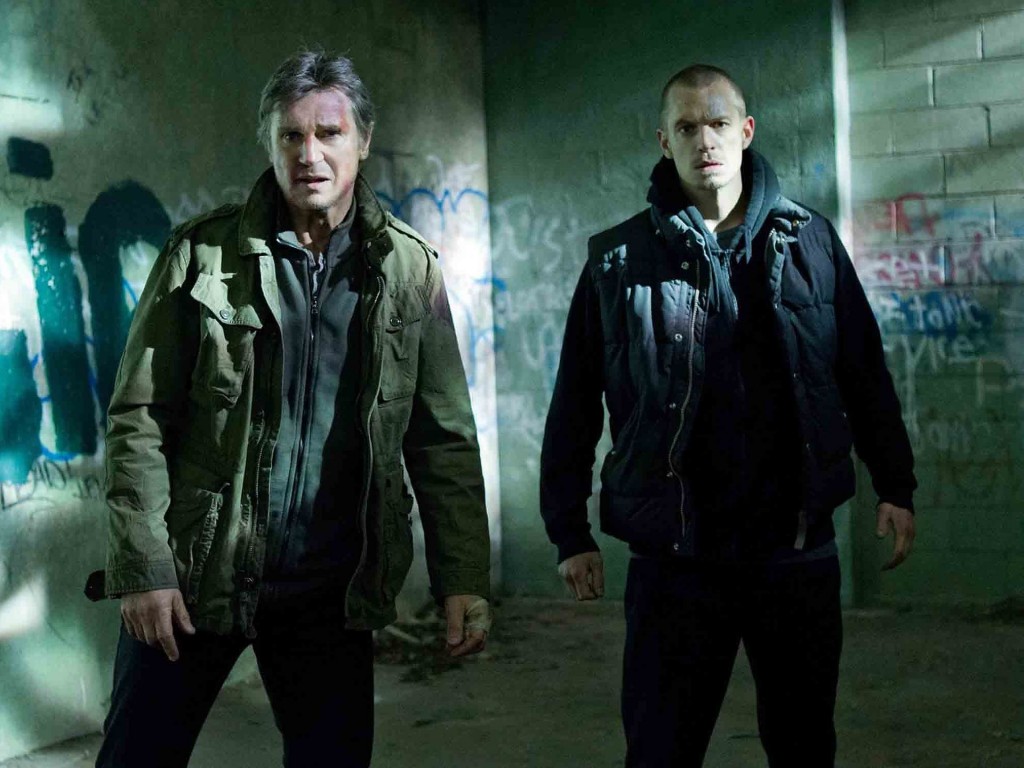 There’s nothing new here but thank God it’s not TAKEN 4. There is no annoying daughter but there are two annoying sons.

Not since the resurrection of John Travolta’s career in 1994 – with the release of PULP FICTION – has an actor been bestowed with an amazing second career as has Liam Neeson. It was 2009’s TAKEN that launched his reign as Hollywood’s most sought-after action stars. He was 62 years old.

Do female psychopaths ever retire to spend their later years as sweet grannies? I kept watching RUN ALL NIGHT imagining what it would be like if some ballsy director and studio had put Julie Christie (73 years old) or Susan Sarandon (68 years old) or even – going younger – Monica Bellucci (50 years old) in Neeson’s role.

I saw Sarandon in TAMMY where she played a horndog grey-haired granny – she’s not afraid to show her age on film. And Bellucci is already on our radar as the oldest Bond Girl in the history of the franchise. So, her age is front and center. Why not exploit it?

All our over-55-years-old female action star needs is the great sexual charisma of Vincent Cassel as her lover/betrayer. It has to be a European man. European men do not consider women over 25 incapable of arousing them sexually. The Sarandon-Cassel match-up would put cold water on the Johnson-Doran coupling.

The reason is always the same – family.

And, since audiences hate strategic planning, the clock is ticking. Isn’t it always?

Jimmy Conlon (Neeson) was once known as “the Gravedigger” in a syndicate run by his childhood best friend, kingpin Shawn Maguire (Ed Harris). While Shawn is still on top of his Brooklyn empire, Jimmy is marginally homeless, a drunk without a family and no health insurance. He keeps going to Shawn’s cocaine-fueled son Danny (Boyd Holbrook) for cash.

Jimmy’s catalog of crimes – apparently he was never arrested for any of them – did not pay much. He was never home and his wife had to raise their son Mike (Joel Kinnaman) all alone without any money from Jimmy’s hits.

I know life is cheap, but you’d think successful hitmen would be paid a decent living.

Somewhere along the way to the present, Mike found out his father was a killer and refused to have anything to do with him. His wife (Genesis Rodriguez) is pregnant with their third child and he works as a limo driver. He is so angry at his father that he volunteers at a Boys Club.

Once we see this set-up, the rest of the movie is just watching Neeson and Harris replaying the De Niro-Pacino diner scene from HEAT.

Danny wants to get into the heroin business regardless of his father’s veto. He also has no intention of returning the front money he took from the Albanian dealers. As standard operating procedure, no one sets up a heroin meet-and-cheat without using a limo. Danny kills all the Albanians and unlucky Mike happens to witness it.

From here on, Jimmy must convince Mike that his life is in danger and only he can help him. He asks Mike to trust him for 24 hours.

Remember in Andrew Dominik’s KILLING THEM SOFTLY when Richard Jenkins Mob lawyer bitched to Brad Pitt’s hitman Jackie that crime had become a faceless corporate enterprise only interested in the bottom line?

So Jimmy has his own corporate-style sit-down with Shawn to discuss the problem and what to do about it. Rules must be followed. Debts must be paid. No voices are raised.

The screenplay by Brad Ingelsby is lean but how does a drunken anti-Santa Claus go into action within an hour? Director Jaume Collet-Serra, who did NON-STOP and UNKNOWN with Neeson, has instilled RUN ALL NIGHT with a tension that is engaging. As a former New Yorker, it was terrific seeing the action take place in the city and its suburbs of Queens and Brooklyn.

Common plays an arch hitman – known to never stop until his contract is fulfilled – has an amazing team working his career. I watched his series on SPIKE TV, his part in SELMA, the Academy Award winning song, and that constant voice-over ad for something. (See, I remember him but not the product!) I expect a guest-starring role on Empire next season.

Victoria Alexander lives in Las Vegas, Nevada and answers every email at asauu@aol.com.