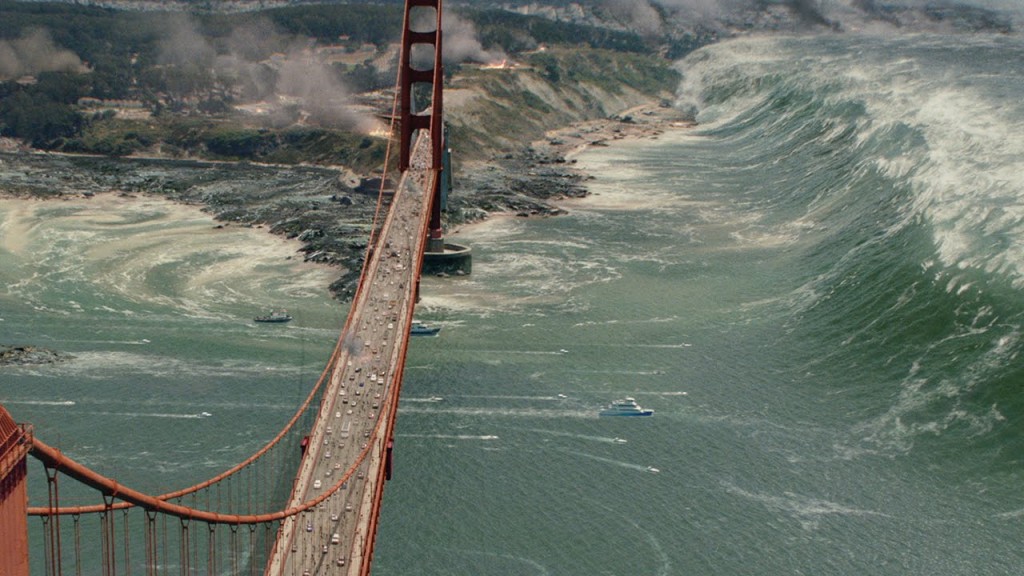 The summer has officially arrived. How do I know that? Just look at the big blockbuster movies currently in theaters and the ones coming up shortly. The nonsense movie of the week is San Andreas starring Dwayne “The Rock” Johnson, wrestler turned action superstar. He’s also done Disney films and as of May 19, 2015 has his own star on the Hollywood Walk of Fame. How can’t he be every little kid’s (don’t forget the women and young men’s) hero.

Well as most of you have guessed, this movie is about the San Andreas Fault once again causing more carnage than the other prior movies about the same topic. With a story that’s right out of a bubble gum wrapper, this is a totally farcical (is that a word?), Looney Tunes, cartoon type of movie that’s designed to sell tickets, popcorn and now the newly added Nachos with Cheese sauce take away platters. Yup, put away your cell phones, your personal belongings and strap in. The ride will start shortly.

The premise is that DJ (that’s my slang for every movie character that Dwayne Johnson plays) is a helicopter pilot for the Los Angeles Fire Department and he specializes in Search and Rescue. In fact, he’s done over 600 of them. In DJ’s own words… “San Andreas is a film about the largest earthquake ever recorded to hit the state of California and the impact and effect that is has across the entire country with epic proportions and it’s also a film about one man’s mission to find his daughter”. Now with that plot line, you’ve just got to see this film! He flies helicopters, planes, skydives, steals trucks, drives boats and even dives without scuba tanks! Now come on, who else do you know can do that!

We start out with a teenage girl (it’s always a teenage girl… Just look at JAWS) driving off a cliff (too bad she wasn’t eaten by a flying Shark like in Sharknado) and here comes DJ to the rescue. Well one thing leads to another and the San Andreas Fault line shifts just north of Las Vegas taking out the Hoover Dam (don’t start with the Dam jokes). Well low and behold, the water empties out of Lake Mead destroying everything downriver. What a disaster! Don’t worry, I’m not giving anything away in this movie that you haven’t already thought of. You see the same scene (as in many other movies but with better CGI) of running water wiping out the small towns. There are small towns down river from the Hoover dam? I thought the next town was Laughlin, 100 miles away. Of course they never discuss the fact that Las Vegas, without Lake Mead, would shrivel up and die within days of not having access to any water! Screw reality, this is a movie starring DJ, flexing his muscles.

Ok, so let’s throw in a stupid script, add dumb, corny lines, lots of action scenes, CGI, explosions, falling buildings, collapsing bridges, a toppled cruise ship, a USS battleship cruising downtown San Francisco looking for a parking spot, fires, destruction of Los Angeles (my favorite part. I love ANYTHING that destroys Los Angeles), add in almost total destruction of San Francisco, all in 3Do and you’ve got a movie. I stand corrected. Most of the destruction was San Francisco, it should have been Los Angeles and I would have given it a higher score. Of course, the characters situated in Los Angeles that are protected from being either injured or killed, by hiding under a cheap fiberboard desk (How totally lame they didn’t use real wood).

I loved this film. It was so ridiculous that I couldn’t stop laughing throughout the entire movie. I was even able to predict the conversation of the characters, almost word for word. The nonsense was so over the top (like a speedboat trying to out climb the wave of an oncoming 100mph tsunami) it was as if they had taken a Road Runner cartoon and brought it to real life! Forget that there should have been at least 5 million people killed (never saw any dead bodies on film), forget that DJ and his family should have been killed a dozen times over, forget that you paid $13 to see this film, just hold onto your seat, lower your IQ by 100 points and enjoy the ride.

Great special effects, great 3D, great pop… No wait. I wasn’t able to have any popcorn. I just had a molar pulled earlier that day and wasn’t allowed any popcorn (I went in for a crown and came out with one less tooth). So for the rest of you, see this movie before you go to the dentist. You never know what could happen in real life.