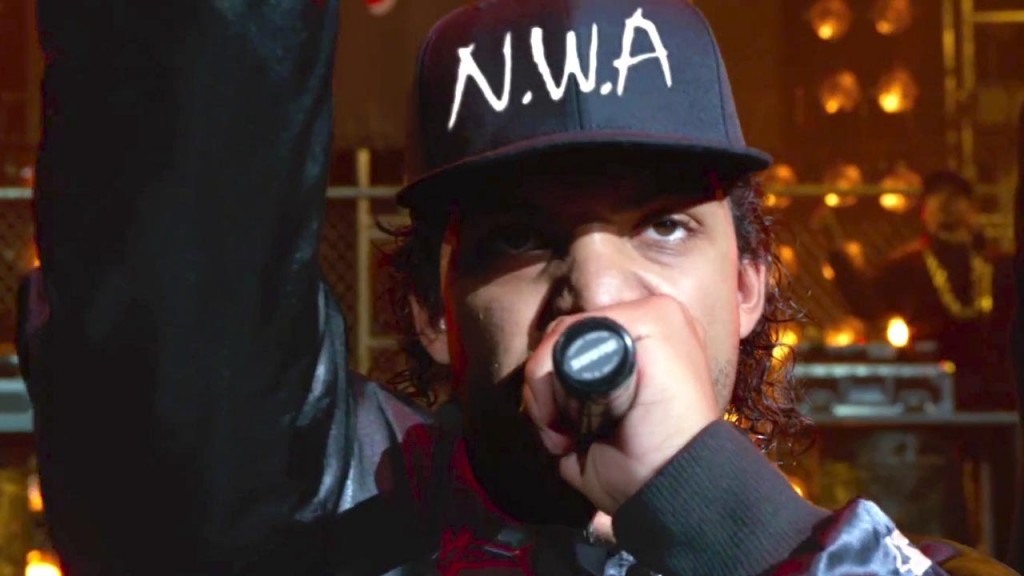 Their older white manager, Jerry Heller (a masterful Paul Giamatti) provides paternal advice as he guides the group into the brutal record business of the early 1990s forming Priority Records and releasing the groundbreaking album which is the title of this film. But he also forms a partnership with Easy- E (Jason Mitchell) forming Ruthless Records and undercuts the other members of N.W.A.

In this epic film which runs 146 minutes no stone is left unturned. Eventually Cube realizes he is getting screwed and Dre hooks-up with the notorious Suge Knight ((R. Marcos Taylor) who forms Death Row Records.

But prior to the break-up, the band releases “Fuck tha Police” and shakes up the American establishment by exercising their first Amendment rights. The film captures the hedonistic party lifestyle of the Afro-American music scene as scantily clad ladies are depicted partaking of sex and drugs. Woman in this film are portrayed as whores and the spoils of commercial success.

Universal made this film for $29 million with the real Ice Cube and Dr. Dre producing. The high level of production values is impressive. The peripatetic camera-work of Matthew Labitique is first-rate. In a summer dominated by white tent poles this film should fill the void for people of color and go straight to the top of the charts.