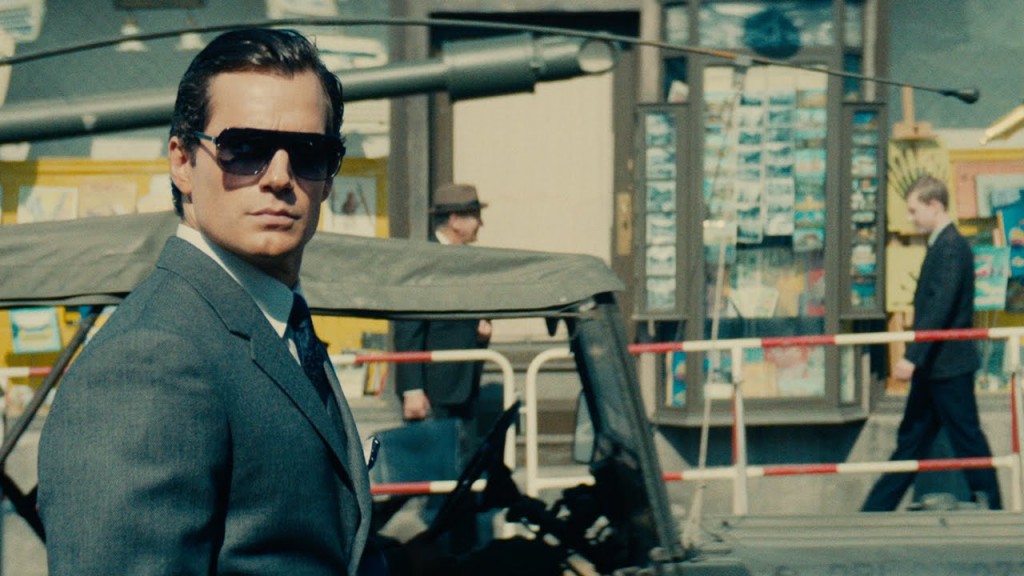 object of desire, he’s the best thing in the movie. Everything else is boring, stunted and a “who cares”?

Screenplay writing 101: Why do we always need a “getting to know you” beginning? Just like hundreds of other movies we see, at first the two macho co-stars are enemies but then must work together, save each other’s lives, and bring about world peace or that last heist. I’m bored with this scenario.

Let’s just jump in and review the movie you will pay to see instead of comparing it to the “beloved” TV series from the 60’s that no one can remember actually seeing.

Has the average-aged moviegoer seen the TV series The Man From U.N.C.L.E. from the 1960’s, or are they just mildly aware that it was a TV series long ago before the Internet?

I cannot compare the movie with the TV series since I do not remember the series. And regardless, I would expect much, much more from a film made by Guy Ritchie in 2015. Indeed, there would be a bigger and grander budget. And maybe some hot sex, male nudity, and illicit drugs.

However, this U.N.C.L.E. is a bore – unless you like looking at Cavill’s virile-telegraphing face.

With Ben Affleck doing his own stand-alone BATMAN movie, I have no hope we will see Cavill’s Superman reign sexually or otherwise over a man in a mask and a costume loaded down with gadgets.

Napoleon Solo (Cavill) is a master criminal and has been sentenced to 10 years in prison. But he only stole from really evil people who had a lot of money. It took slimy Bernie Madoff to steal from people’s life savings. Men like Solo steal with flair and then smoke a good cigar. I am sure Madoff justified what he did by saying he was only feeding people’s greed for something they did not work for or deserve. Napoleon’s criminal history doesn’t bother us.

I do not know how David McCallum played Russian spy Illya Kuryakin in the TV series, but co-writers Ritchie and Lionel Wigram decided to present their Illya as an uptight virgin. He’s also a brute without any elegance. Armie Hammer’s Illya does not have a personality worthy of being an exciting action thriller partner.

Armie Hammer should be having a much better career. THE LONE RANGER did him no good except to link him forever with Johnny Depp’s most expensive flop. Hammer has the striking good looks and build to be a leading movie star but he hasn’t found the right director to objectify him. If I were advising Armie, I would have told him to inject some homoeroticism or, play on Illya’s nearly-suppressed psychopathic personality and add a little sadism.

At least a sadist for a partner would have been an interesting foil for debonair, bespoke wearing Napoleon Solo.

Instead, Ritchie’s Illya was teased as a boy and now he has fits of rage he cannot control. How he became a KGB agent would have been an interesting story.

Ritchie and Wigram should have re-considered the storyline. Illya Kuryakin is a Russian spy but proudly says he is from the Ukraine – a country infamous during World War II for being willing collaborators with the Nazis and even more savage in killing Jews in the death camps. A Holocaust survivor said that Ukrainian guards outnumbered Nazis 10-to-1 at Sobibor camp. It is also clear that many of the 100,000 Ukrainians who volunteered to serve with the Nazis were not coerced into joining the SS. And finally, during the 2011 trial of accused Sobibor Nazi extermination camp guard, Ukrainian John Demjanjuk, a survivor of the Sobibor death camp testified that Ukrainian guards in Nazi-occupied Poland were worse than the Nazis’ infamous paramilitary SS.

Ritchie and Wigram send Ukrainian Kuryakin to ferret out a German Nazi scientist?

Along comes the third wheel separating any hint of gayness in the Solo-Kuryakin pairing. If beautiful East German mechanic Gaby Teller (Alicia Vikander) is supposed to be the eye-candy, Napoleon hardly gives her an appreciative glance.

Gaby’s father, Dr. Udo Teller (Christian Berkel), was a Nazi (by duress, of course!) and Adolf Hitler’s favorite rocket scientist. There must have been a lot of perks that went with that position! Both the Americans and the Russians want him. After Napoleon captures Gaby and Illya hunts them down, their bosses turn up with the plan: They must work together to find Gaby’s father and stop him from making a bomb. The human race is at stake, so get along fellas!

Gaby’s Uncle Rudy (Sylvester Groth) may know where her father is hiding, so Gaby takes her brand new fiancé – Illya – to meet him. Uncle Rudy is a mess with bad eating habits but he does hang with a decadently rich crowd. The Queen Bee is Victoria (Elizabeth Debicki) and she is the Donatella Versace of Napoleon Solo’s world.

Hollywood powers have anointed Alicia Vikander our newest movie star – its not up to the public. She is very talented and very beautiful – however, not in this movie. Ritchie is not a woman’s director. Vikander’s Gaby actually does her own hair badly and wears really awful makeup. Her big, wonky false eyelashes would have laughed her out of the 60s. When the agents take her couture shopping, they choose the worst, unsexy clothes. Gaby’s major almost sex-scene with Ilya has her in a pair of God-awful pajamas. THE MAN FROM U.N.C.L.E. will not bring back 60s fashion.

I’m disappointed with Guy Ritchie. U.N.C.L.E. is not clever or amusing. The story is hack-worthy. It’s nice to write with friends who know your comfort zone, but Ritchie needs a new team to inspire him.