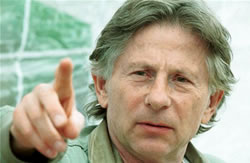 “The 76-year-old French-Polish film director Roman Polanski will not be extradited to the USA,” the Swiss ministry said in a statement issued on July 11th. “The freedom-restricting measures against him have been revoked.”

Polanski’s lawyer Herve Temime said the director was still at his Swiss chalet in the resort of Gstaad, where he has been held under house arrest since December.

“Mr. Polanski can now move freely,” Justice Minister Eveline Widmer-Schlumpf declared. “Since 12:30AM  July 11 he’s a free man.”  Although his crime is not to be laughed at, arresting Polanski some 33 years after the fact seemed ridiculous.

The L.A. Police had forgotten Polanski until Marina Zenovich‘s Roman Polanski: Wanted and Desired, reminded them that the application of LA justice had been (and might still be) corrupt, political, ego-driven and obstinate in the face of damaging facts.

Roman Polanski can go about making movies and living out the rest of his life comfortably in Paris.

For once the Swiss took a position.