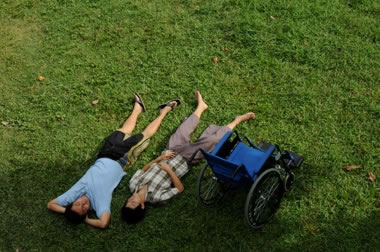 The other major winners at the 10-day long event in the historic city of Wroclaw were from European directors. The FIPRESCI International Critics Jury gave their nod to MAMA, a Russian film by the directorial team of Nikolay and Yelena Ricard. The Audience Award, voted on the Festival’s public, was given to LE QUATRO VOLTE, an Italian/Swiss/German co-production by director Michelangelo Frammartino.

In the FILMS ON ART International Competition, the jury awarded the Best Film (and a 10,000 Euro cash prize and guaranteed Polish distribution) to the French co-directors Cédric Dupire and Gaspard Kuentz for the film WE DON’T CARE ABOUT THE MUSIC ANYWAY. Special Mention was given to the UK/France/’Netherlands co-production OVER YOUR CITIES GRASS WILL GROW by director Sophie Fiennes.

The Festival is also a showcase for new trends in Polish cinema, and the winner of the NEW POLISH FILMS competition (titled the Wroclaw Film Prize and including a 25,000 Euro cash award) was won by director Przemyslaw Wojcieszek for the film MADE IN POLAND. Winning as Best New Director was the team of Adam Sikora and Ingmar Villqist for the film EWA. Sikora, a celebrated cinematographer making his directorial debut, will split the 10,000 Euro cash prize with his collaborator.

The Festival presented over 500 films from 50 countries, including 240 features, bringing over 530 screenings to festival audiences and visiting industry guests. 315 journalists from Poland and abroad were accredited and the audience reach was almost 125,000 people.