With the Summer of Woodstock revivals almost upon us, The Beats who begat the freaks are being produced for the silver screen.  No fewer than three “indie” features are forthcoming: (1) “Howl” a narrative feature from noted documentarsts Rob Epstein and Jeffrey Friedman(“The Times of Harvey Milk”) takes its inspiration from the legendary poem by Allen Ginsberg (2) “Kill Your Darlings” from producer Christine Vachon’s Killer Films and (3) “On The Road” the long- optioned(by Francis Coppola) classic novel adapted by director Walter Salles and screenwriter Jose Riviera  of the highly respected “Motorcycles Diaries”. 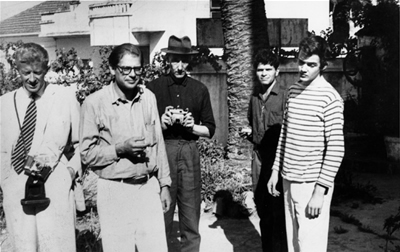 “Howl” is being produced by Christine Walker and stars James Franco as a youthful Allen Ginsberg.  Walker is quoted in a recent issue(June 1-7) of Variety as saying the Beats were “romantic and sexy, led dramatic, compelling lives and tackled sexual freedom and drug use and all those issues that resonate throughout our culture today”.

“Howl” which is being readied for a late 2010 release date, will bring many of the same hot button gay issues that make Prop 8 in California so controversial to the screen. Both Epstein and Freidman are gay activists whose cinema is emotionally charged with authenticity.

“Kill Your Darlings” is still without financing but Vachon hopes to raise the money for a late summer or early fall “lensing”.

“On the Road” has been adapted in the past by noted screenwriters Michael Herr, Russell Banks, and Barry Gifford.  The ultimate road novel is based on Kerouac’s experiences with Moriarty(based on Neal Cassady)Carlo Marx(based on Ginsberg) and Old Bull Lee(based on William Burroughs)as writer Sal Paradise(based on Kerouac himself) travels all over North America in a journey to find himself.

Coppola’s American Zoetrope is producing and Pathe is putting up the money.