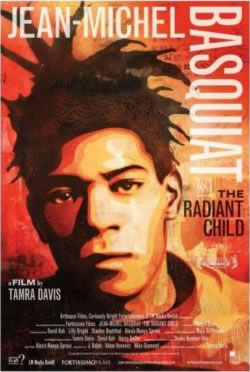 Even if you don’t know his name, you probably know his imagery. The streetwise graffiti, the charismatic iconography, the madcap use of words and visuals from pop culture…..the coolness of the work and the indelible signature of a gifted, natural (as opposed to heavily trained) artist. And add one more romantic detail…..death at the tender age of 27 after a blazing career that now sees his doodlings capturing record prices on the art auction market. Like James Dean before him, he is forever enshrined as a young man of his age who never endured growing old.

Jean-Michel Basquiat, the Brooklyn-born “street artist” whose five years of fame in the 1980s has secured his position in the top ranks of art history, is the subject of a superb new documentary JEAN-MICHEL BASQUIAT: THE RADIANT CHILD, directed by his longtime friend Tamra Davis (DOWN AND OUT IN BEVERLY HILLS) and produced by France’s Pretty Pictures (www.prettypictures.fr), which also has international rights to the film. The film’s core is a previously unseen series of interviews that Davis shot of her artist friend in candid closeups in Los Angeles in 1985. Less than two years later, Basquiat was dead….a victim of drinking, drugs and the hype and demands of an artist whose meteroic rise was as dramatic as his sudden and precipitous fall.

Basquiat’s story has been told several times before—in Glenn O’Brien’s loosely crafted 1981 fiction film Downtown 81(aka New York Beat) about a downtown artist struggling to pay the bills; and most notably in Julian Schnabel’s 1996 film Basquiat, with Jeffrey Wright’s spot-on performance in the lead and a who’s who of indie stars playing such art icons as artist Andy Warhol (played in the film by David Bowie) and gallerista Mary Boone (Parker Posey). The title of this latest film comes from a celebrated article on Basquiat in the New York Times, where the moniker of the “radiant child” first was uttered and which provided an errily prophetic description of both his personal and artistic appeal.

Beginning and ending with the Langston Hughes poem “Genius Child” (“Nobody loves a genius child”), the film offers an image of Basquiat as perpetually misunderstood, under appreciated, and tormented. Did this stem from his “outsider” status as a street artist who graduated to the big leagues of the art world, or what was the contribution of continuing racism that bedeviled a black artist in a predominately white scene? Did the mainstream art press and industry’s categorization of him as a typecast “black artist” cut to the core of his moodiness and depression?

Basquiat, in his own words for a change instead of the solicitous exclamations of those who got rich from his artwork, offers a fascinating look at his influences, particularly the dual inspirations of music (bebop jazz and hiphop, in particular) and literature (beat poetry especially). Although he was certainly not the first artist to do so, Basquiat used visual iconography and words and phrases as signals in his work, mixing the literal, the figurative and the philosophical in works of astonishing visual dexterity. The film offers many scenes of the artist working on his canvases and full-on explorations of the finished works (with accolades from leading art critics and gallery honchos accompanying the diverting slide show).

While much of what is said is praiseworthy, the director has included commentary from close friends and former lovers that illustrate the man’s darker side, including his heroin habit, his often violent behavior, his obsessive desire to please his father and his ambivalence about his own ambition and superstar success. As a beacon of the downtown art and music scenes that flourished in the SoHo and East Village neighborhoods in downtown Manhattan in the 1970s/1980s, the film illustrates the intoxicating excitement and freedom of the bohemian scene before the area (and the art world) became so gentrified and money conscious. As a snapshot of a bygone era when lofts were occupied by artists rather than bankers and lawyers and freedom and sexual experimentation were the life blood of urban living, the film is a moving testament to a time and place that no longer exist (or at least have moved to Brooklyn and other outer borough nabes).

For those familiar with the art scene of those years (and I count myself among them), there are some glaring omissions in the narrative. While Basquiat’s fetishistic alliance with pop king Andy Warhol is exhaustively presented, there is no mention of Basquiat’s equally prestigious colaboration with Italian artist Francesco Clemente (who at the time was more influential than the past-his-peak Warhol). Another strange misstep is not including any mention of Mary Boone, the leading SoHo gallerista of her time, who did much to elevate Basquiat’s reputation with her high paying clientele. While the film does include the other art world personalities that are central to the story (including gallerist Anina Nosei and power broker Larry Gagosian), one can only assume that Ms. Boone herself did not agree to be included in the final film or was so burned by her involvement with the moody artist that she conveniently air brushed him out of her professional trajectory.

While the finished film, with its terrific soundtrack, editing style and forever forward motion, certainly illuminates what made Basquiat so special (and so tragic), one can only speculate that there was more to the story of this “radiant child” than appears in the film’s slim 90 minutes. However, for those hungry to learn more about those rollicking years when rents were cheap and art was produced on almost every corner, the film is a worthy document and testimonial to a time, a city and a great talent whose life was lived on a short but brilliant fuse. The film, currently in theatrical release via specialty distributor Arthouse Films (www.arthousefilmsonline.com), will certainly be one of the documentary success stories of the year and a major contender for end-of-year awards and critics prizes.