Presented by the Film Society at Lincoln Center and Unifrance, the 16th edition offers its customary hors d’oeuvres of genres and styles, reflective of the larger French film industry, one of the most prolific in the world and a beacon for countries who have seen their own output overwhelmed by Hollywood blockbusters.

The stars are here….Deneuve, Depardieu, Bruni-Tedeschi, Scott Thomas, Sagnier, Wilson, as are great auteurs, both classic (Claude Lelouch, Bertrand Tavernier, Phillipe Le Guay), contemporary (Alain Corneau, Francois Ozon, Benoit Jacquot, Catherine Breillat) and a host of newer names making their reputations in their native France and now here. Things began on a strong note last Thursday, with the Opening Night launch of the popular film festival favorite POTICHE, the latest film from cult director François Ozon. The film, nominated for four César awards (the French Oscar) was a huge box office hit in France, no doubt due to its repairing of Catherine Deneuve and Gérard Depardieu. Deneuve, who also starred in the director’s ensemble musical 8 WOMEN , is being given a hefty retrospective at the BamCinematek that parallels this contemporary French film program. 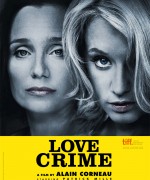 While it is hard to hang a thematic lynchpin on such a diverse program, this year’s line-up has a distinctly feminist caste. Of the 22 feature films presented, a third are directed by women, with others also prominently featuring women and their sensibilities. In POTICHE, the story centers on a trophy wife who takes over her ailing husband’s factory. MOZART’S SISTER offers a complelling portrait of thwarted musical genius, restricted by the morals and sexism of the 18th century. THE PRINCESS OF MONTPENSIER features a strong performance by Mélanie Thierry as the object of affection of warring factions. Two generations of actresses, Kristin Scott Thomas and Ludivine Sagnier give powerful performances in Alain Corneau’s LOVE CRIME, a tale of corporate competition in the workplace. A strong supporting cast of Spanish actresses, including the delicious Carmen Maura, are also prominently featured in the comedy SERVICE ENTRANCE, a comedy of class struggle and personal liberation by Phillipe Le Guay.

Not all of the films on display are quite as breezy. Benoit Jacquot, who apparently relishes his ability to shock an audience, is back with another controversial showcase. DEEP IN THE WOODS is set in 19th century France, when a young vagabond arrives in a village and ist aken in by a doctor and his daughter. While earning their trust, the film proceeds to a lengthy and discomforting rape scene, which tears apart the civility of the father and daughter relationship. Counter-intuitively, the rape victim, driven by an uncontrollable force, leaves home in search of the man who has stripped her of her innocence. Truths are revealed on the part of this lusty trio as the filmmakers turns our bourgeoise assumptions on their head.

Several of the films on tap are new to me and I will dutifully report on some of the breakout films from the series, which represents a truly impressive snapshot of contemporary French cinema, in my next report. For a complete list of films being presented through March 13, visit: www.rendezvouswithfrenchcinema.com