The political rhetoric has been ramping up between the United States and Iran for years now and the Persian nation is fast becoming enemy number one in the eyes of the US and our allies. However, far from the halls of non-diplomacy, film audiences have seen a different side to the Iranian nation, a highly humanistic side that has been supplied through the personal dramas of the films of such celebrated filmmakers as Abbas Kiarostami and Jafar Panahi. While news reports in this part of the world tend to look at Iranian society as rather monolithic, the truth is much more subtle, as is beautifully portrayed in the film A SEPARATION by Ashgar Faradhi. After winning the Golden Bear at the 2011 Berlin Film Festival, the film has proven to be a hit on the international film festival circuit and will open later this month in the US via indie distribution powerhouse Sony Pictures Classics. The film is already being singled out by various film critics associations and is currently the one to beat in the Best Foreign Language Oscar race. 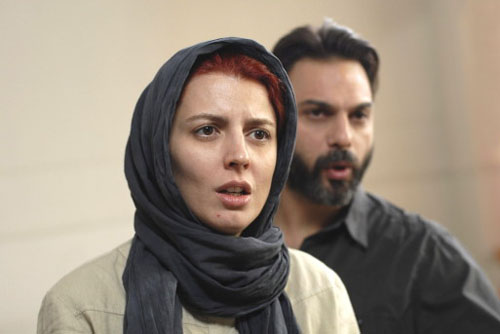 A SEPARATION plunges us into life in Tehran with an urgent sense of reality that is enhanced by handheld realism. We meet thirtysomething couple Nader (Peyman Moaadi) and Simin (Leila Hatami) in the divorce courts, who have had a falling out over the wife’s insistence on leaving Iran with their ten-year-old daughter. Nader, who represents the more traditional, rather macho stance, disagrees, mainly due to the elderly father that he must take care of who lives with them and is suffering from advanced dementia. Simin moves in with her parents, while Nader hires a woman, Razieh (Sareh Bayat), with her own domestic pressures, to look after his father while he’s at work. She’s from a lower class, and her presence helps the film in its effort to examine differing attitudes in Iran to status, gender and religion. This set up provides a catalyst to life-changing challenges for all the characters, as Razieh’s hot-headed husband, Hodjat (Shahab Hosseini), defends his wife’s honor and threatens to unravel both sets of marriages.

One of the most engrossing elements of A SEPARATION is how the drama swings all over the place as we see its story from various viewpoints, thus altering our perceptions of the tricky moral compass that governs both the film and the lives of its characters. The film offers a gentle criticism of class differences in the supposedly classless society and deftly portrays the changing consciousness of women in the country’s rigid patriarchy. While its story is rather deceptively simple, the film offers a fascinating look at a society in transition, which tries to juggle tradition with modernity, all in a particularly Iranian context. For those interested in the human stories behind the news headlines, A SEPARATION is a must see.